The Last Interview by Eshkol Nevo 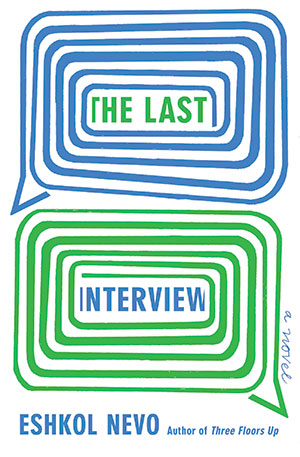 UNCONVENTIONAL ISRAELI writer Eshkol Nevo, the author of several prizewinning novels, has found a new way of reinventing himself with his latest book, The Last Interview. Writer’s-block anxiety or pure stratagem? He chooses to answer questions submitted to him by an unnamed internet interviewer. The narrator himself is not named, and though he insists the novel is not autobiographical, he shares many traits with the author. They both are mature writers, conducting writing workshops, of which the readers can get a glimpse. They both discuss their books with high school students inside the country, and with readers abroad. Both are married with three children, and their grandfather was Levi Eshkol, the third prime minister of Israel, after whom the writer is named. Even though the narrator insists nothing is true in the book, sometimes his experiences seem to really be those of Nevo himself, the relentless “story-hunter” and “story-teller,” who will use any tales overheard on public transportation, or any of his immediate entourage’s experiences, and turn them into well-constructed stories.

In the book, the narrator pays dearly for that. His own sixteen-year-old daughter, Shira, shuns him after she inadvertently reads a passage from his book, undeniably taken from her personal journal. She flees to a boarding school in Sde Boker, a faraway spot in the Negev desert. That incident may have triggered what he calls his dysthymia, a low-grade depression that makes him sad and melancholy over almost everything that happens in his life, and certainly these include his beloved wife’s recent colder attitude toward him and his best friend, Ari’s, terminal cancer.

Obviously, recurrent questions about his famous grandfather annoy him, and he prefers to talk about his beloved grandmother who welcomed him with tea and compassion when he was lonely and brokenhearted, or his infamous bohemian artist aunt. Among his answers to the hundred-plus questions, two characters emerge as the most important: his wife and Ari. As more and more of the questions become intimate or embarrassing, the answers prompt past regrets, open childhood wounds, confessions he would have loved to “undo,” just like the computer command that he uses freely in his writing. They take the appearance of a flowing novel full of emotional content, far from the silly answers to silly questions at the beginning, like: “What role should the Jews of the Diaspora play in relation to Israel?” “They should come to meetings with Israeli writers. Because no one else does anymore. Except BDS . . . And they leave anyway.” Or: “If you weren’t a writer, what would you be?” “A deejay. It sounds good, and it is not a complete lie.” Indeed, it is not: his frequent use of songs and music to express feelings or situations is one of Nevo’s idiosyncrasies as a writer.

Although humor and comic relief pervade some of the stories, the dysthymia amplifies after he unwisely tells his wife, Dikla, he cheated on her while in Colombia to provoke her jealousy; he is immediately thrown out of the apartment. He may try to explain it was only a fib, yet she cannot believe him, the self-declared “professional liar.” Even though he reintegrates into the household to help her with the children, Dikla maintains her distance, and their separation looms in the air. The narrator tries to win her again with dubious success, while his minor attempts at cheating on her fail miserably. The truth is, he is still passionately in love with the mysterious, graceful, ideal companion he found in her. Even after twenty years of marriage, he remains the hopeless romantic who used to woo her with twenty-five-page letters while on a trip to South America.

When he is not writing or with his family, he is visiting Ari and standing guard for him. Ari, who protected him when they were traveling to dangerous areas and who taught him at a young age to laugh at himself. Friendship, family, love are once again favorite themes in Nevo’s fifth book. But not just these tropes. Most of the stories here are moving, revealing Nevo’s capacity to demonstrate compassion toward the people he meets. His mastery in probing and describing the most delicate inner feelings in a person seems infinite. It even transcends rifts in ideology, reaching out to the beautiful human being living on the other side.

The Last Interview, in spite of its Q&A format, is a seamless page-turner that was nominated for the Prix Femina étranger 2020.