The Discomfort of Evening by Marieke Lucas Rijneveld 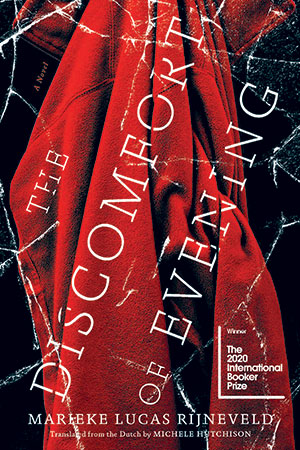 THE DISCOMFORT OF EVENING received the 2020 ANV Debut Award and the International Booker Prize. Marieke Lucas Rijneveld is the first Dutch author to win the prize, along with Michele Hutchison, the translator. Set on a dairy farm in North Brabant in the south of the Netherlands, Rijneveld’s novel takes its readers into the dark heart of grief. They provide a case history of the ways the loss of a child can erode connections between family members.

One reason for the novel’s acclaim is ten-year-old Jas’s powerful narration. Rjineveld skillfully captures her tone and perspective. She is the middle child, between Obbe, a teenager, and her younger sister, Hanna, eight. Jas has experienced previous trauma; she has already stopped taking off her coat. She keeps it on for the next two years.

As the novel opens the family is sitting around the breakfast table on the day before Christmas, laughing and talking. In a few hours their eldest son, Matthies, will die in a skating accident. The Dutch Reformed church her family attends dictates how they mourn Matthies. Jas cannot speak his name or cry. “We are in the world, not of the world,” Dad reminds her. People are not meant to be happy. The church’s theology requires suffering and a belief in the resurrection of the dead. “Next day he’d be born again,” Jas thinks. Dad says that day “will be a day like any other. Matthies will be as entirely expected as He is, when he returns.”

Buried in farmwork, Mum and Dad take little notice of the changes in their children. Dad says they must “get along with what we’ve got,” but Mum would rather jump off the silo. Jas thinks how little they amount to without Matthies. Dad paints over the doorframe where he recorded the children’s height and shutters the windows against prying eyes. Obbe grows increasingly feral, drawing his sisters into his sexual experiments and bloody sacrifices of animals. When foot-and-mouth disease strikes the village farms, they must kill off all their stock. Obbe hangs a dead calf from a tree in protest.

Jas cannot digest her food. She begins turning inward. When the family notices, their help seems more like abuse. She gets cramps, stabbing pains, and her belly swells and hardens. She feels nauseated but fears vomiting. “I had to keep it inside me.” Her body is the ground on which the family enacts its drama. As she identifies with the dead brother’s body, her living body wants to shut down, unless she can use it to recover Matthies. Jas would take a bout of diarrhea “if He would bring them home safely.”

The blurring between the categories of the living and dead starts when Jas peers through the window of the refrigerated coffin and sees Matthies’s blue face. Later, when Jas asks about worms eating his corpse, Dad refuses to discuss it. Matthies’s skates are gilded and hung from the ceiling. Mum venerates his empty chair. “It’s not just a chair.” They set a place for him at the table. His coat hangs by the door. Death has its own coat hook.

Inside the home, emotions run from indifferent to violent. The parents avoid touching each other and their children. Jas wants them to mate to heal the loss. She longs for even an accidental brush, “skin against skin, hunger against hunger.” She decides that “[i]f you were no longer able to hold an animal or a person tenderly, it was better to let go and turn your attention to useful things instead.”

Two years after Matthies’s death, the village turns its attention to Jas’s coat. It’s dirty and smells of cows. She says, “I’m stuck inside.” Dad vows to rip it off and burn it. Obbe makes a cutting gesture across his throat. Even after showering she cannot erase the smell of him lying on top of her. Jas compares her coat to Samson’s hair. It’s her strength, her rebellion, her second skin. “Without my coat I’ll be Death’s slave.” Her friend Belle asks if her brother is dead or if Death is her brother. Neighbors stop them in the street or call with advice. Reverend Renkema says that evil grows from the inside. The church elders who visit once a week to talk cannot disperse the gathering darkness coming from the home.