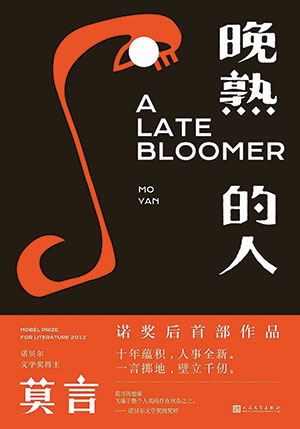 THE GERMAN WRITER Martin Walser once declared, “If one wants to talk about China, Mo Yan is a must-read.” Now, eight years on from his winning of the Nobel Prize in 2012, Mo Yan has published a new book, entitled Wan shu de ren, a collection of twelve novellas presenting realistic yet somewhat absurd stories rooted in northern China’s villages, spanning from the 1950s to today. All these stories are staged in Mo Yan’s signature hometown: Gaomi County, Shandong Province, a literary territory Mo Yan has fictionalized in most of his previous works.

Different from the long novels with their grand structures and complex plots, Mo Yan’s latest book is made up of engaging short stories in the form of a series of personal anecdotes, focusing on the great changes in contemporary rural China. One of the most conspicuous changes is the widespread use of smartphones, which means the villagers can fight against the perfunctory local police by filming videos and publicizing them on the internet (“Peace Under Heaven”). When a chemical plant in town produces polluted water and endangers people’s lives, it is demolished after being exposed online (“My Cousin Saining Ye”). However, the internet is also used by some malicious people to spread rumors: “In real life, 10,000 people may not amount to much, but on the internet, only 100 people can make a wave” (“Red Lips, Green Mouth”).

Besides the “new man” and new things in the country, Mo Yan also touches on some historical events to enrich and enlarge the contexts of the short stories. During the Cultural Revolution, one school student incites the other pupils to beat their young teacher to death, simply because her parents were labeled as “anti-revolutionary academic authority” by the Red Guards (“Red Lips, Green Mouth”). An old blacksmith mercilessly cuts off his son’s hand to prove his loyalty and obedience to government as “left-handedness” was being demonized at that time (“Left Scythe”). Mo Yan’s uncle died of a gas explosion in a state-run coal factory, but his family was forbidden to attend the funeral, in case the news would be made public (“Torches and the Whistle”).

It is worth noting that Mo Yan also writes himself into all the stories by adopting the “1.5 first-person” narrative perspective. “‘Mo Yan’ in the book is another me. I’m observing and recording the process of how ‘Mo’ interacts with people”—in this way, Mo Yan says “himself” is like his literary agent, who voices his opinion and comments on other characters freely, so that “he” can break the boundaries between real-life and fictional worlds, which is exactly what the author wants.

In Mo Yan’s opinion, the “late bloomer” in his title is a commendatory term describing people who conceal their talents at a young age but shine in the latter half of their lives. In the namesake novella, Mo Yan’s old friend Jiang Er is the best embodiment of this term. He buys a piece of land near Mo Yan’s house and builds up a scenic spot, with a film studio named after Mo Yan’s book Red Sorghum, right after Mo Yan’s sudden fame. Like a hero in Horatio Alger’s “rags-to-riches” stories, Jiang becomes a successful businessman through his hard work, though also through his cynical manipulations (“A Late Bloomer”).

Ironically, Mo Yan identifies himself as one of the late bloomers, even though it becomes clear that he disapproves of their belief in “making money while neglecting morality.” In the sphere of art, Mo Yan defines being a late bloomer as having a spirit that always pursues innovation and transformation: “We always want changes in our works. We want to be able to surpass ourselves, and we want to maintain our vitality of art and ability to create.”

As critics have recognized, Mo Yan’s new book, like a kaleidoscope, once again proves his superb craftsmanship in telling stories as well as piecing them together as a whole, and the vibrancy and accuracy of his portraits give a fine, panoramic view of changing rural life. It also demonstrates Mo Yan’s steadfast insistence on showing life as it is, rather than life as it ought to be. In this sense, A Late Bloomer can be rightfully called a “modern Chinese rural romance.”