The Electric Baths by Jean-Michel Fortier 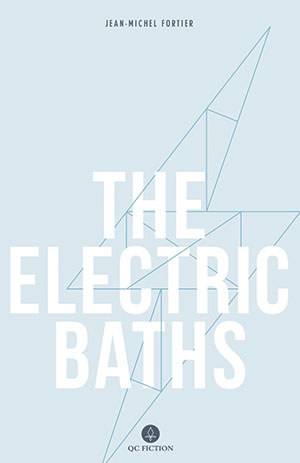 IT’S A LOVE STORY with an epigraph from a novel about a wife accused of murdering her husband: “Just look how Madame loves Monsieur! You see, she’s crying . . .” This declaration from Anne Hébert’s Québécois classic, Kamouraska (1970), poses as sentinel to Jean-Michel Fortier’s novel.

In Québec’s “county of ***,” a widow’s life might be predictable, “set like tracks in the snow.” Or not: “She picked up the knife, set it down again. Picked it up. Set it down.” Here, a love story has rat poison, a rope, a one-eyed cat, and more widows than brides.

Renée LePine, not widowed but single, works at Spencer House, monitoring the eponymous baths where one husband died. A simple task—daily, at midnight—but not: she drops weight, suffers insomnia, and her desperation increases. Characters slip between action and apathy, sadness and goodness, delirium and dreams, and acting and lying.

At first glance, Fortier’s communities fit within the Québécois literary tradition: bustling and populated with colorful characters as in Roger Lemelin’s and Gabrielle Roy’s novels, with the spellbinding dream-scape of Anne Hébert and the quotidian grit of Marie-Claire Blais, but there’s a present-day gaze toward agency and violence. A scenic structure accentuates plot elements: the extorted become blackmailers, a performer returns from the stage of the Théâtre de l’Ambigu-Comique on Boulevard du Crime in the “Old World,” and a widow serially solicits four widowers. Actions intersect, so one woman’s romantic liaison creates a draft that moves the spiderweb above another woman’s bed.

As in Fortier’s debut, The Unknown Huntsman (2014), a gun appears in a pivotal scene—there in a church basement, here in a child’s hands. Neither weapon-holder’s motivation is accessible, but here a related character’s memories, which “tinged her wishes a more vivid and more bloody shade,” contain clues. Wit and irony dilute the bloodshed. Characters have surnames like Pilgrim, Webb, Beurre, and Roux. There’s also an abundance of archetypal curiosities: spiders and spells and soups; puddles and bottles and pebbles; sleepwalkers and double lives and sarcophagi.

Readers beware: the tub in the honeymoon suite of Fortier’s The Electric Baths isn’t heart-shaped but coffin-shaped.