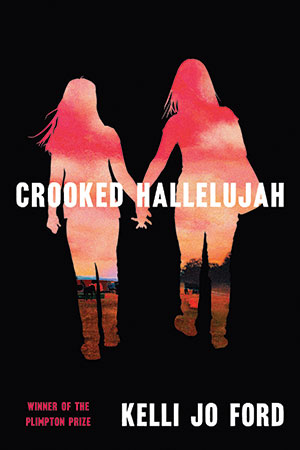 A SPOTLIGHT FOCUSED on strength can only cast a large shadow onto failure. Kelli Jo Ford’s novel-in-stories asks readers to examine the residuals of abuse from a patriarchy emboldened by the doctrine of Christianity. Moreover, it calls attention to how motherly love becomes a tool for rebellion against persecution.

Crooked Hallelujah unveils the connection between three generations of mixed-race Cherokee women. The main character, Reney, grapples with the familial patterns handed down to her from her grandmother, Lula, and her mother, Justine. The book unfolds inside thirteen stories separated into three sections. It begins with Justine at age fifteen negotiating parameters of the Holiness Church under the rule of males in her family and reinforced by her mother, Lula. Justine’s rebellion against strict dogma results in her being compromised by an older male, forcing Justine to become a mother when she is still a child herself. Reney is born at the center of numerous crossroads. One, her grandmother’s overrighteous religious beliefs clash with her mother’s need to rebel against Christian constraint. Two, Reney, as a member of the Cherokee Nation, struggles with overcoming historical trauma associated with a brutal colonization process. And three, Reney moves between Oklahoma and Texas, negotiating southern Bible Belt norms as she attempts to pull herself out from underneath the weight of toxic familial patterns.

Despite history and environment, each generation exemplifies communal strength as grandmother, mother, and daughter find in each other a source of power. In the first story, Lula and her mother, Granny, climb into a vehicle with Justine, coming together—“For now, that little car filled with three—almost four—generations flew”—in an act of matrilocal rebellion against patriarchy. Similarly, Justine, as an adult, consistently moves Reney back to Lula’s home in Oklahoma when she leaves the undesirable men in her life. Reney benefits from bonds with powerful women, returning to their strength, seeking to learn the subtle ways they seem to rescue each other. Reney has more than her mother’s and grandmother’s hands, and the stories, at their core, ask if Reney will learn to be like them in the ways that count.

Normalcy. Consistent normalcy is the brand of voice, where southern phrases mix with a twang or slight drawl. Whether depicting trips to Lake Tenkiller when Reney is young or her trips to work at Dairy Queen as an adult, the stories are told with a focus on the routine. The core described above is told with subtle plot intertwined with the mundanity of holding a moment together. Which is to say, the characters are perpetually caught in a series of daily chores: “Motions upon motions, feed the animals, bang the coffee grounds, read the books.”

It is in the overall contemplation of Crooked Hallelujah where a careful reader can search, reflect, and do the work to discover common themes to pull the stories together. Once readers pace themselves with the methodic rhythms of country living, there are artifacts to discover inside the pages. The spotlight shining on Reney, Justine, and Lula casts a large shadow onto masculine failure. Whether taking car rides together in an Oklahoma summer or sitting next to a hospital bed, the three women’s connection and strength cannot be examined without considering the pressures from a patriarchy emboldened by harsh Christian doctrine. So much so, in the apocalyptic tones of the final pages, one has to sit back and wonder if a patriarchal system is as indomitable as divine wrath or natural forces, telling us all “so much for Earth and all those little people down there,” including Reney.