Three Rings: A Tale of Exile, Narrative, and Fate by Daniel Mendelsohn 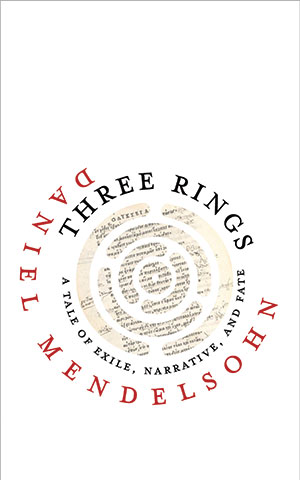 THIS UNIQUE BOOK by memoirist and classicist Daniel Mendelsohn traces with deep learning and imagination the relation between stories and the world. It revolves, on first glance, around groups of threes. Its three chapters consider the works of three unlikely literary companions: Erich Auerbach, François Fénelon, and W. G. Sebald. All three were exiles, and all three considered or reflected in their greatly varying works questions about narrative, fiction, and reality—and the relation of all three to one another.

As the reader discovers, though, other authors and books also play profound roles in Mendelsohn’s meditations: his own widely admired memoirs, The Lost: A Search for Six of Six Million and An Odyssey: A Father, a Son, and an Epic; Homer’s Odyssey; Marcel Proust’s In Search of Lost Time; and the Turkish translation of Fénelon’s Télémaque, by Kamil Pasha, to mention just a few. All are carefully examined, thoroughly or briefly, in Mendelsohn’s subtle consideration of how narrative works and how it is related to reality. Mendelsohn is especially interested in how his three main authors deploy or discuss a number of challenging narrative strategies—elaborate digressions and attention to peripheral matters crucially among them—and how those strategies both serve and challenge their representations of the world.

Mendelsohn is intensely aware, though, of how differently these sundry authors regard these narrative strategies. What the reader senses early on, and what gradually becomes an explicit theme of Mendelsohn’s book, is the divide between the “optimists,” for whom narrative strategies—no matter how digressive and seemingly aimless—lead to coherence and unity, and the “pessimists,” for whom those same strategies lead to disorientation and dead ends. Sebald exemplifies this pessimistic strain most thoroughly, as opposed to the optimist Homer. “Like Homer,” Mendelsohn concludes, ”Sebald uses ring composition to great effect. But unlike the narrative rings, circles, digressions, and wandering that we find in Homer, which seem designed both to illuminate and to enact a hidden unity in things, the ones we find in Sebald seem designed to confuse, entangling his characters in meanderings from which they cannot extricate themselves and which have no clear destination.”

As an inveterate memoirist, Mendelsohn’s ultimate quarry lies not in his literary subjects but in his own deepest convictions about these matters—convictions that have informed his own life and works. His book concludes, therefore, with a frank declaration of his own narrative optimism, centering on “a wandering [narrative] technique that yet always finds its way home, a technique . . . with its sunny Mediterranean assumption that there is indeed a connection between all things.” Of course, he knows that his optimism is not shared by all his authors—especially not by Sebald but also, in his darker moments, not by Auerbach either. Yet Mendelsohn holds firm to his narrative optimism as this artful book—full of its own digressions, peripheries, and doubts—wends its way to its own moving conclusion.