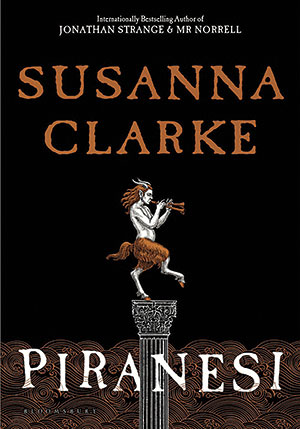 HALL AFTER ENDLESS  marble hall. In some, bones of the dead are devotedly cared for; in others, waves arch and albatrosses rear their young among enormous statues of a Minotaur, a woman carrying a beehive, a faun. This is Piranesi’s home. He has always lived there—he thinks.

Sixteen years after the mammoth success of her historical fantasy, Jonathan Strange & Mr. Norrell, Susanna Clarke’s newest novel, Piranesi, centers on its eponymous narrator. A voracious note-taker, Piranesi details his life in the labyrinthine House, from his calculated avoidance of floods to speculations about who else might exist in the world beyond himself and the Other, a manicured but aloof man with whom Piranesi shares his world. In such a world of only two—or could there be more?—humans, the novel’s epistolary format and dependence on Piranesi to carry the narrative has potential to render the book monotonous. Clarke’s splendid characterization of Piranesi as an enthusiastic and sweet man, however, completely overcomes this structural barrier. A joy to follow through his world, Piranesi’s psychological struggle competes with his genuine, childlike admiration for the House. The stylized language in which he writes, furthermore, offers opportunities for wry humor when Piranesi slips into moments of modern candidness.

Readers of Clarke’s debut novel, which garnered her a Hugo Award and a Man Booker Prize nomination as well as a BBC adaptation in 2015, will find much to love in Piranesi. Decidedly shorter than Strange & Norrell, which clocks in at around one thousand pages, Piranesi is a quick 250-page affair that leaves readers eager to revel at length in Clarke’s world. Its preoccupation with magical pasts and scholars behaving badly is reminiscent of her debut, but Clarke’s triumphant stroke in Piranesi is its distinction.

At first bewildering, the novel steadily unravels the puzzle at its core to satisfying ends. Its dramatic irony, which sets in about halfway through, establishes an unsettling but riveting tone and aids the reader in understanding the world in which Piranesi is enmeshed. Further ruminations on the ethics of knowledge, and the cosmos and our small place within it, develop the novel to a degree of profundity that refrains from didacticism.

A thoroughly charming novel, Piranesi offers a world of escape haunted by the darkness of reality. Its analysis of “the mingled glory and horror of existence” is an admirable successor in Clarke’s oeuvre of thought-provoking and utterly creative fantasy.