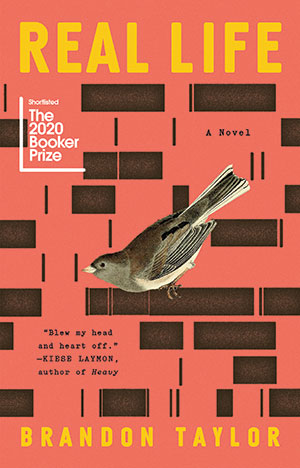 AS A FINALIST for the Booker Prize, Brandon Taylor’s debut novel, Real Life, has already achieved the status of one of the best novels of 2020. Award nominations are often mired in the politics of selection, but Real Life undoubtedly deserves the attention it is receiving for expressing in luminous prose the ongoing struggles of Black lives on the margins of predominantly white spaces like research universities and liberal communities ostensibly open to diverse sexual orientations.

The setting of Real Life is modeled after Madison, Wisconsin, a college town by Midwestern lakes, the setting where the protagonist, Wallace, a young, Black, and gay graduate student arrives from Alabama to make for himself a new life as a biochemistry researcher. Like a classical tragedy, events unfold over a dramatic late summer weekend, which, along with flashbacks to the past, shake the bearings of Wallace’s tenuous sense of identity forged during his four years of graduate student life.

Taylor is unsparing in his depiction of the harsh competitiveness of graduate student life in research labs: the long hours of demanding work and the constant toll of being judged by peers and mentors. In Wallace’s case, these quotidian struggles are compounded by his fundamental isolation in being the only Black student in the lab and the only Black man in his group of friends. His intellectual abilities are constantly questioned, most of all by his adviser, Simone, who, while appearing to be nurturing, constantly undermines his successes and keeps him in a state of self-doubt. The lab operates like a surveillance state with other graduate students watching Wallace’s progress and complaining to Simone. His relationship with Dana, an Asian American female graduate student, is particularly frayed and comes to a head when Dana accuses Wallace of misogyny and complains to Simone.

The humiliation that Wallace faces at work is compounded by the callousness of his friends. Even though a large number of his friends are gay, he is aware that the gay community is predominantly white, and he will always be an outsider as a Black gay man in this group. Some “friends” remind him of his deficiencies, and while this is ostensibly referring to his lack of preparation for graduate school, for Wallace, it is a code for his lack of whiteness. Over the course of the weekend, Wallace begins a sexual liaison with his friend Miller, who insists that he is straight but is equally attracted to Wallace. In the course of their intimacy both Wallace and Miller reveal their traumatic pasts: Wallace’s early experience of sexual molestation, the deep-seated homophobia and abandonment by his parents, and Miller’s history of violent rage.

The novel ends with profound uncertainty for Wallace and his future. The last chapter is a throwback to the innocent optimism of his early days in Madison, a day spent sailing on the lake and gathering by a bonfire to toast to their new life. For Wallace, the allure of this life of the mind and a place to fashion his own identity is still haunting. There are moments of genuine community, as with Wallace’s friendship with Brigit, but on the whole Taylor portrays the continuing marginality of Black queer lives in institutions of academic prestige.