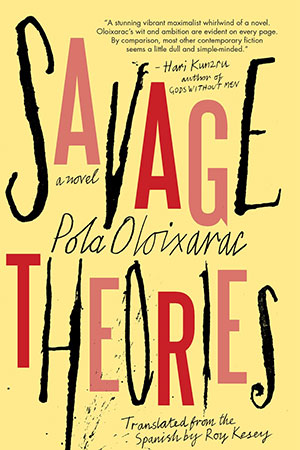 In Savage Theories, Pola Oloixarac addresses the conflict of being both an individual with ideas and a social animal with libido. Theory and sexuality are woven together in the work, but only through an endless, brutal process, which the narrator depicts with uncompromising wit and arrogance. Oloixarac gives her narrator freedom to comment on anything by the tonal illusion of disinterestedly commenting on everything. Her style grants a feeling of resolution to each issue raised—be it an analysis of 1980s Argentine pop culture or the effects of early psychoanalysis on political philosophy. The reader feels learned and rushed along to the next exciting revelation. And they are exciting—Oloixarac explores hushed-away and ignored culture in broad daylight as well as that part of a person we would rather forget about, though it churns and wails.

Situated in the dark corners of Argentine academia and counterculture, the narrator invests the reader in her fierce ambitions while relaying, entwining the intelligent passion of Kamtchowsky and the haughty genius of Pabst. If there is love in Savage Theories, it is first sensual, then intellectual. Emotion, in this world, is an oft-ignored chemical byproduct. And yet each character is full of yearning, more or less silent, which compels and completes them. But completion, or self-realization, is not their ultimate goal. Each character strives to enable or force others to see the world through their perspective; in order to realize this goal, Kamtchowsky employs her camera, Pabst relies on his blog, and the narrator turns herself over to her obsessively grand philosophical theory.

The language of Savage Theories is dense but fluid. At times the erudite references and ideas, so casually intermingled, border on the solipsistic. It is then that the reader may grow frustrated; pulled along by the author’s artful current, one may find oneself finishing a section and surprised at how little has been understood. Occasional endnotes and footnotes do much to repair this experience, and the pleasure of puzzling over Oloixarac’s complexity is very real. While remarkably intelligent and uncompromising, Oloixarac’s artistic touch is her principal means of captivating readers. And, even this, she is not shy to assert. The narrator writes to her prey, “The seductive powers of syntax grow ever stronger by subjugating those gathered around the one who organizes the verbs,” and the reader blushes, compelled to continue reading.