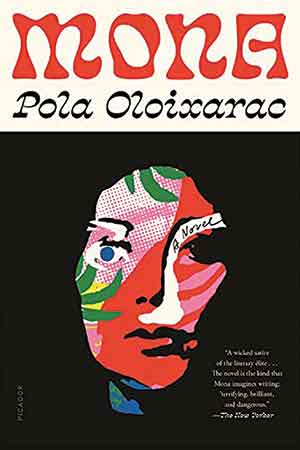 ARGENTINE AUTHOR Pola Oloixarac means business in her third novel, Mona, recently translated into English from the original Spanish by Adam Morris. The protagonist, Mona, is a Stanford-backed writer new to the circuit and nominated for Europe’s most prestigious literary award, the Basske-Wortz prize. We move with her through the festival—a parody of literary culture populated by ridiculous writer personalities—with a growing sense of unease as we realize she is struggling with something unnamed, heavy, and serious.

The predictable plot follows the schedule of the conference, but the novel takes advantage of that natural structure in a delightfully absurd ending. A nebulous vibe of violent mystery seeps through the text, in which readers are made explicitly privy to none of the following until very late: the origin of Mona’s bruises; the significance of young girl Sandrita’s eerie, parallel story; and the explanation of the strangely threatening men and several dead animals spotted on the grounds. To glean everything, readers must operate with some working knowledge of literature—Oloixarac winks at those willing to go the extra mile in solving the puzzle. In a devastating, climactic recall of the off-screen events of Mona’s aggressor abusing, sexually assaulting, and disposing of her like garbage, an undercurrent of trauma swells and spills over despite her constant, futile attempts to suppress it with concerning amounts of drugs and alcohol. True catastrophe ensues as the prose style takes a sharp turn into the surreal.

Mona is a critique of the literary community and publishing industry, and, on a broader level, capitalism and self-centered leftism in an era of technology. The interactions between the writers, particularly in the Q&A scenes, resemble Twitter discourse in which the goal is to be contrarian and heard regardless of quality of thought. From my perspective as a white person, Oloixarac is dead-on in that publishing and academia are couched in a racist, white casualness that forces authors of color to be reduced to their race or ethnicity—the “modern tools of the trade, weapons in the battle royale of ‘world lit.’” Through a constellation cast of near-caricatures from various backgrounds, Mona points out the toxic, holier-than-thou ecosystem of leftist artists and the implicit biases even they carry, which range from harmless shots taken at personal essayists all the way to substantial fatphobia and racism.

While unlikable protagonists certainly exist in contemporary literature, making fiction more interesting, critical analysis plays a crucial role in differentiating between the worldview of the narrator and that of the author. Where this novel is smart, honest, and funny in spades, it is also too harsh, maybe problematic, in the name of satire. Mona is quite fatphobic toward Lena, especially after Lena makes Mona “feel a bit bad about herself, which Mona always figured was every fat woman’s secret objective.” The sheer number of these types of comments tips the objective over the line from a social commentary on beauty standards to a dunk on fat women. Similarly, the dialogue Oloixarac—who is not Jewish—wrote for her Jewish characters brings great pause: “My great-grandparents didn’t die in a concentration camp for me to have to listen to shit like that. I’m telling you: it made me ashamed to be Jewish. I’m so sick of everything people say in the name of the Jews.”

The well-intentioned message of the novel becomes an enigma when juxtaposed against the blurb by her friend Junot Díaz, an author whose alleged sexual misconduct has divided the literary community in the culture of #MeToo. When asked about Díaz in an interview, Oloixarac responded in Spanish, which translates to: “It has arrived at an extreme in which men cannot even say ‘Hello’ to women. I don’t like the demonization of men, which disempowers women.” A regular talking point of systemic misogyny is that the enforcement of consequences for one’s actions equates to the demonization of (cisgender) men (i.e., “cancel culture”). According to this logic, doesn’t her novel demonize men, specifically predators in the literary community?

There is something to be gained by unraveling the narrative’s craft decisions, especially the use of intertextuality and the resourcefulness of subverting a plot that built itself simply by existing. However, there are inconsistencies, perhaps even hypocrisies, tied up in the ethics of this novel. What does it mean to write an avant-garde book ultimately critiquing the lack of equity in art, only to turn around and publicly support Junot Díaz, while blaming cancel culture? How effective can a satirical parody be if the author herself perpetuates the problems she’s critiquing in her characters?