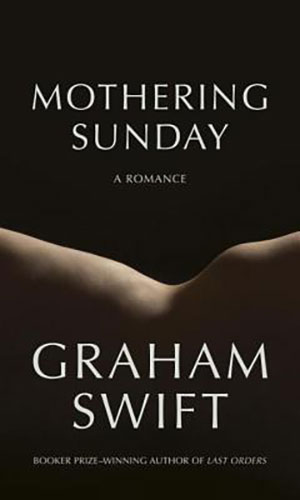 On March 30, 1924, on what was known in England as Mothering Sunday—the day servants were given off to visit their mothers—Jane Fairchild, an orphan and housemaid at Beechwood, walks alone and naked through a library and discovers her future calling as a writer. In a sense, the scene becomes a metaphor for the birth of the creative imagination, the search for identity, and the power of stories, which are at the heart of all Graham Swift’s fictions.

Within this one day, Swift is able to cover the vanishing Georgian society and culture of England through the memory of Jane, now a famous novelist in her nineties. As a maidservant at Beechwood, Jane has been having a surreptitious affair with Paul Sheringham of Upleigh, the neighboring home. But Paul, whose two older brothers were killed in the war and who himself is halfheartedly mugging up for the law, must marry for money—for the time of great estates and landed wealth is coming to an end. And so their ways must part, but under circumstances neither expects.

Graham Swift has written nine novels, including the Booker Prize–winning Last Orders (1996) and two volumes of short stories, his most recent being England and Other Stories (2014), but this is his first attempt at a novella. Swift’s stories generally concern themselves with characters who are either London professionals or from the working classes, but all of whose lives were profoundly changed by World War II. In this case, the setting and characters suggest a shift in focus and may have their inspiration from the wildly popular PBS series Downtown Abbey, with shared themes of upstairs/downstairs, illicit affairs, the women’s movement, and the devastating effect on English culture and society brought by World War I.

In terms of Swift’s canon, Mothering Sunday is probably closest to his underappreciated Tomorrow (2007), which centers on a female narrator, Paula Hook, who meditates at night on a secret in her life and marriage. Swift has often been criticized for his portrayal of “traditional” female characters, and Mothering Sunday will be no exception. While Jane Fairchild is a strong, independent, and sympathetic woman who rises to the top of her profession, she finds her voice as a writer by reading boys’ adventure stories and the tales of Joseph Conrad.

Nonetheless, the compression of Mothering Sunday shows Swift’s mastery of the shorter form and surely will elicit comparisons to Ian McEwan’s On Chesil Beach (2007). Tautly written and carefully structured, Mothering Sunday is a riveting piece of fiction that may just show Graham Swift at his best.