The Borrowed by Chan Ho-Kei 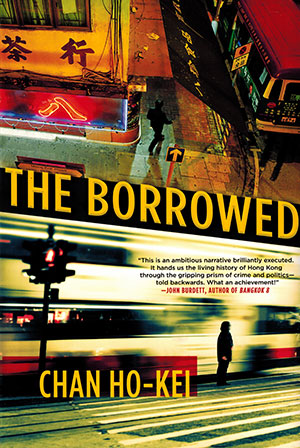 This is a remarkable book, truly brilliant, whose 490 pages is initially intimidating, but reading it is as pleasurable as binge-watching a miniseries or reading your way through another author’s novel series. Divided into six chapters, The Borrowed is really six discrete novellas with six different crime stories set in Hong Kong in six years beginning in 2013 and scattered backward to 1967. Each focuses on the relationship between mentor Kwan Chun-dok and his “student,” Sonny Lok.

Kwan is a brilliant police detective with great powers of observation and deduction, while Sonny, sincere and honest, plays Watson to him. Kwan, of course, uses unconventional methods to trick out confessions, and the first story shows Lok has taken up the baton his mentor (on his deathbed) has been forced to drop. Some of the stories have a lot of action in them—shoot-outs, ransom drops, and bombings—while at least one is a masterpiece of the old-fashioned drawing room mysteries in which the suspects have been gathered to talk through the odd details of a crime until one of them confesses.

Each story is a worthy detective story on its own, but together they make a mosaic of Hong Kong as it passes from being one of the jewels of the British Empire to political reintegration with China. The constabulary changes in the level of corruption. The bureaucracy and internal politics of the organization hinder the honest cop seeking justice, and gang leaders often have more influence than government officials.

The Borrowed manages to combine the pleasures of many types of crime story. One story will remind you of Ed McBain, another of Agatha Christie, another of Raymond Chandler’s evocations of the city. It is indeed rare for a novel demonstrating so much artistic skill, operating on many social and psychological levels, and with so much mastery of what might be called classical tropes to be so consistently entertaining.