Notes Toward a Pamphlet by Sergio Chejfec 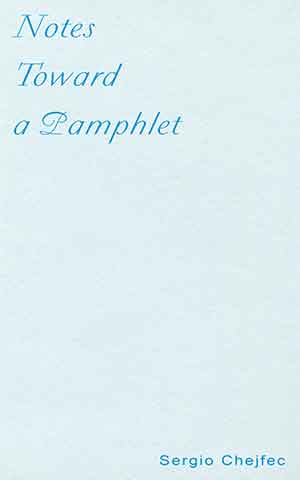 WE MAY THINK OF THE pamphlet as an obsolete genre and format, the kind libraries and archives collect and educated readers associate with the religious or political conflicts of centuries ago. With its 2020 Pamphlet Series, however, Ugly Duckling Presse has given us an ingenious collection of “twenty commissioned essays on poetics, translation, performance, collective work, pedagogy, and small press publishing,” whose overall aim is to explore the literary potential and relevance of this, indeed, most current form. Moreover, the inclusion of Sergio Chejfec is an appropriate and brilliant choice, given his own peculiar exploration of writing (and literature) as a process rather than a product, constantly reflecting on, and reenacting, itself.

With the figure of the Argentine poet Samich—who lived “in that part of the twentieth century before everything was either stored or archived,” wrote almost nothing, published even less, and “aspired to a voice permanently lowered”—Chejfec’s exploration expands to the idea of a writerly life pursued through nonaction, inaction, or subtraction. In a present “saturated with redundancy” and hyperactive behaviors, the slippery, digressive, and ephemeral Samich represents a challenge or, in the words of this pamphleteer, “a wedge with which I propose to start the cleft, then the crack, and later the splintering of the whole worn-out schema.”

The text consists of an introduction, an outline of “The Character,” a sequence of thirty hierarchically numbered notes, and a coda. The introduction is vintage Chejfec, a shrewd sequence of associative processes that anticipate and contextualize the more systematic, nested sequence of the notes. Listening to the radio broadcasting a “program dedicated to lives upended by events somehow involving trains” leads to the idea of waiting as “the layout upon which actions are delineated.” Trains and waiting make the narrator think “naturally” of Hitchcock and Samich, “who had nothing to do with Hitchcock [and] knew how to position himself diametrically opposed to any vitalist intention associated with trains or anything else—even if he’d been a frequent passenger on them.”

Not surprisingly, the notes begin with a train’s arrival and Samich walking to his house on the outskirts of Buenos Aires, a typically Chejfecian nonspace to which the poet has moved from his faraway province. What follows is a canny exposition of Samich’s progress through his own “system,” which is simultaneously centripetal and centrifugal, and further suggests the “paradigm of the alveolar, enemy of the linear, which grows in all directions.” Through his followers (the “small and vague group” of relatives, close friends, and admirers for whom he writes and from whom he eventually withdraws) he achieves the quasi-oracular status of a “radiophonic being,” operating “on the surrounding environment by irradiation.” (Not unlike the Trieste-born editor and critic Roberto Blazen, who during his life was very influential without publishing anything, and whose posthumous writings appeared recently in English with the suggestive title Notes Without a Text.)

When Samich’s life “assumes an elegiac nuance,” and “moves toward a slow and fatal concentration,” we are subtly reminded of a pamphlet: this obsolete, absolute form whose function, in Chejfec’s keen definition, is to “first concentrate, and afterwards to dissolve within,” a particle of time extracted from current events.