In Memory of Memory by Maria Stepanova 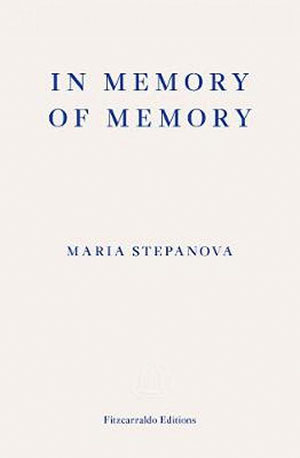 THE LITERATURE OF MEMORY often explores what consciousness is stored in and speaks from objects. Proust’s À la recherche du temps perdu uses the (now legendary) madeleine cakes of Marcel’s aunt Léonie to access hidden memories from Combray; Péter Nádas’s A Book of Memories finds a key motif in the colored stained-glass windows of Berlin and Budapest apartment buildings and the way in which they filter the light coming in. Between these two novels (1913 and 1986, respectively) spans the fiction of recollection of the twentieth century. The poet Maria Stepanova’s first long book, In Memory of Memory, is clearly in love with this tradition, while it also mourns its irrevocable loss: in the present century, the connections between memory and object, meaning and world, and mind and body have become obscured.

For Stepanova, objects appear “just as they were”; the italics are original here, and the phrase is significant, as it chimes with a leading motif in contemporary political thought: could-have-been-different / just-as-it-is denotes an ontological modality that lingers at the cusps of sovereign power, together with a promise of emancipation. Indeed, objects, as they appear to the private archaeologist Stepanova, do not arrive together with their proper meanings and histories; they emerge in excess of narrative. They are just things, although things that communicate, in an obscure or even a negative way, the history of her family to the writer. It is this communication that must be carefully unpacked and deconstructed. In the same way and for this very reason, Stepanova’s writing presents itself as more clearly of a learned or scholarly character: it engages explicitly with Walter Benjamin, Susan Sontag, W. G. Sebald, and other writers interested in photography and history.

Clearly, Stepanova testifies to—and warns against—a contemporary, postmodern variant of the separation of mind of body; a decision enforced by the trauma of the Holocaust, which has ripped the fabric of history between generations, as well as our uncanny social mass media that in Stepanova’s analysis resemble the imploding crater of Benjamin’s essay on The Idiot. In this sense, when remembering memory, besides contemplating the lives of family members, Stepanova is also making an existentialist statement on the brink of an abyss wherein history disappears. Sebald is the closest comparison in this regard.

For memory has an essential connotation in the work of saving as well as, here, letting go. In a crucial chapter devoted to Osip Mandelstam and Sebald, Stepanova draws out memory’s work of “making the past strange,” restoring it to the thing, giving it back to time. Consciousness withdraws into artifact once again; here, we witness something resembling the birth of Odradek, the mysterious creature from Kafka’s story. In Memory of Memory has been Maria Stepanova’s lifework since she was ten years old; this great book is a highly urgent theological treatise on memory and saving.