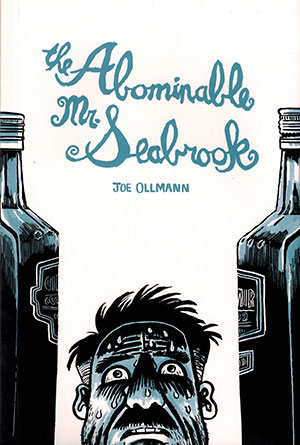 The outline of William Seabrook’s life casts him as a juicy subject for a biography. A published writer, sexually kinky player, adventurous traveler, one-time supposed cannibal and coiner of the word “zombie,” he is a made-to-order comic-book or pulp-fiction hero. Joe Ollmann serves his subject well by graphically illustrating many of the details of Seabrook’s life in 296 nine-panel pages. His drawings in gray, black, and white emphasize the darker sides of Seabrook’s life in bars and asylums as well as the eerie aspects of his adventures in Haiti, Arabia, and Africa.

Bold and daring though he was, Seabrook often comes across as a bit of a con artist in most aspects of his life. The women who married him were not the objects of his real lust, which was directed only toward the women who would submit to being shackled and whipped and perhaps not penetrated. His stints with various publications often ended in dismissal and unhappiness. And nothing, neither a woman, a book project, nor a trip to distant lands, could move him away from drink. In most of these well-drawn pages, Seabrook is repeatedly depicted as unshaven and drunk, with a cigarette dangling from the corner of his mouth.

Born in 1884, Seabrook was the son of a lawyer turned Methodist minister. From the moment his younger brother, Charlie, was born, Seabrook hated him, an emotion that was exacerbated when the family took his brother and sister away and left young William with his grandparents, who were straight out of a gothic novel. But sadly, Ollmann’s attempts to portray pivotal moments when Seabrook’s untoward predilections were formed often read like armchair psychoanalysis.

It is not impossible to write a fascinating graphic biography of a drunken writer, especially one who crossed paths with Aldous Huxley, Gertrude Stein, Sinclair Lewis, and Thomas Mann, even if the subject is abominable and obviously so. Seabrook could even be charming and witty, which Ollmann captures with strong artistic skill and imagination, but his portrait of Seabrook loses the reader’s interest intermittently. Too often, Ollmann takes the element of surprise out of the biography by foreshadowing with a heavy hand. Ultimately, a life of getting plastered, having exotic travel adventures, and tying up women is not as interesting as it might seem at first.