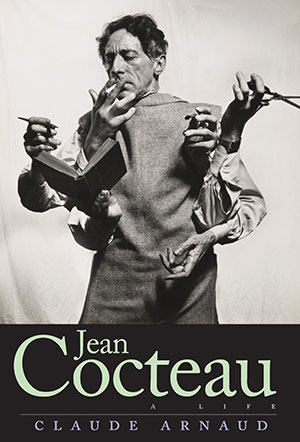 Jean Cocteau was bewitched, bothered, and bewildered in his lifetime: bewitched by exceedingly young males (Radiguet, Maurice Sachs, Edouard Dermit, etc.), some of whom he idealized with ill-disciplined homosexual ardour; bothered and bewildered by rivals and enemies (many virulently homophobic) who accused him of having an overinflated reputation. Although Cocteau enjoys a positive reputation today as a poetic filmmaker, he was despised and reviled by the surrealists (especially André Breton, René Char, and Georges Sadoul), sometimes denigrated even by those he liked (Jean Genet, Pablo Picasso), and he had a pathetic need for approval. Unable to distinguish between art and life, he oscillated (as Claude Arnaud contends) between “intoxicating idols” (Max Jacob, Picasso, Sartre) and the “image he made of his own being.” Cocteau’s attempts to be “the sensitive soul of the world” led to several breakdowns, artistic distresses, and paranoid delusions. This exhaustive book is a rich mine of information, detailing how Cocteau emancipated himself from his domineering dilettante mother while turning into a self-conscious dandy (with a mania for eclectic imitation) and a “sad clown of modernity.”

“I am made of rubber,” Cocteau told André Gide, explaining that when he came into contact with people, he lost his shape by taking on their views and manners, only to resume his own shape after they had gone. As Arnaud asserts, Cocteau’s existential philosophy was closer to Sartre’s (“To be is to be perceived”) than to Genet’s neopaganism. His pathological volubility (a freakish countess taught him how to enchant and dominate by torrents of talk) proved to be dangerous because it opened him to the charge of being a better talker than writer. Arnaud’s biography encompasses Cocteau the myth-loving writer, designer, filmmaker, and entrepreneur, Cocteau the gay trailblazer and provocateur, Cocteau the self-destructive and possibly mad opium addict, and finally Cocteau the aging self-parody (making commercial drawings and plates signed with his initials).

The book is essential reading for anyone interested in French social and cultural history spanning Proustian Paris, two world wars, the modernist movement, and after. It offers a fascinating portrait of its conflicted subject whose mutability could be a challenge to any biographer. However, it often fails to analyze his plays, films, poems, and novels, and it is contaminated by a propensity for digressions and pompous purple prose. Arnaud appears not to meet a figure of speech he does not like. He calls Cocteau variously a toreador, bull, nervous rosebush, and a vacuum cleaner. And, alas, he writes many dumbfounding sentences that swell malignantly.