The Shell by Mustafa Khalifa 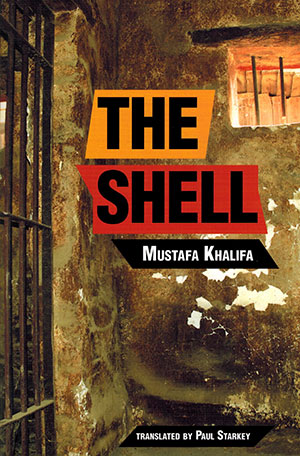 Mustafa Khalifa’s debut effort, The Shell, is difficult to stomach. It is also undoubtedly necessary. A fictional account that emerges from one of the most relevant and contemporary scenarios, the text anchors the reader with its examination of depravity yet engages and compels its audience to read on as the work illuminates treasured, albeit painful, moments of perseverance and triumph.

Musa, a film student studying in France, is immediately apprehended after landing in his home of Syria. He is subsequently withheld, tortured, and then transferred to the harshest prison under Bashar al-Assad’s regime. Repeatedly stripped of his humanity and pressed against death’s precipice, Musa survives with dark humor and the solace brought with a shared struggle. The narrator quickly develops a mode of memorization derived from the practice of his fellow inmates, cognitively noting his struggle and biding time until he can record his journal physically. Unfortunately, Musa is forced to endure for over a decade, a duration Khalifa echoes with his harrowing prose.

Khalifa’s illustration of torment is striking and compelling. In some instances, the writer’s imagery is akin to Dante Alighieri’s Inferno as each pursuant episode sets a new precedent of human horror. To combat this, Khalifa maintains a realism and optimism through the lives of the inmates, often providing a very real face to an otherwise nameless and imminent cadaver. As the novel progresses, Musa’s predicament slowly morphs from scenes of helplessness, such as when he is forced to swallow the mucus of a prison guard, to challenges the narrator is prepared to overcome. That is not to suggest the content of the novel’s latter half grows desensitized, but it is evident of Musa’s resolve.

Though Khalifa’s attention to detail is exceptional, the unanticipated comedy of his discourse is often its most compelling suit. From the brief exchange Musa shares with a fellow prisoner after the latter party mistakes his toe for the lips of his wife, to the tale of a particularly aggressive guard’s acquisition of a new nickname at his own expense, each instance provides a needed reprieve, proving the most troubling of scenarios cannot hinder the spectrum of emotion. Khalifa’s masterful control of pace keeps these asides from trivializing the meat of his work, instead building toward an empathetic whole.

The Shell’s faults are few, though some of the text’s key characters can feel minimalized before there is an opportunity to become too attached. However, this periodic feeling does seem in line with the grizzly and fatalistic nature of The Shell’s primary setting. Despite this, the novel perseveres, conveying strength in humanity throughout its darkest depths.