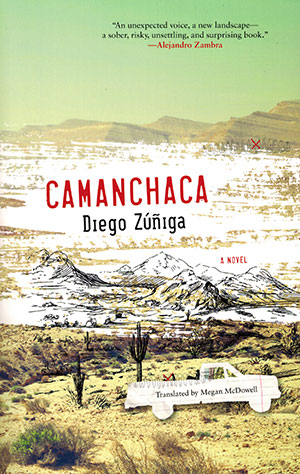 Camanchaca is a thick fog often seen along certain parts of the Chilean coast. Pushed along by the winds coming off the Pacific Ocean, it often appears at night, covering the road in a thick, hazy layer. The camanchaca keeps you from seeing clearly, it is dangerous, it makes the landscape blurred, and it demands attention and caution, much like the novel by Diego Zúñiga that borrows its name. The story is narrated in brief fragments in which synthesis, brevity, and poetics characterize the remarkable debut novel of this young Chilean narrator.

Camanchaca is a road novel along the lines of Cormac McCarthy’s The Road, but it is narrated with an intimacy and minimalism more reminiscent of the best work of Alejandro Zambra. A father and son set off on a journey from Santiago, Chile, to Tacna, Peru, to visit a cheap dentist who can help fix the boy’s teeth. The protagonist, a child of separated parents, tries to reconnect with an indolent father who has married for the second time. The trip to Peru is also a trip toward the past, a hazy place where the character loses himself among a depressed, sometimes-incestuous mother, a grandfather who reads the Bible, and a family that is not his own.

The charged atmosphere of this family is similar to the interior landscapes of the characters, whose memories and actions bear a meaning that the protagonist can hardly discern. The confusion is intentional and well crafted. But that’s what this novel is about: seeing when you cannot see, trying to see when the camanchaca has made everything blurred, putting together the pieces of a fragmented life to build a new life in the present.

Among this novel’s many merits (which go far beyond the stylistic), Zúñiga has achieved something more: he has depicted, with astonishing perfection, the mediocrity of the Chilean middle class, its simplicity and its emptiness: characters who barely communicate and pass their time watching TV, sleeping, and eating sandwiches wherever they may be; half-brothers who hardly know each other and look at each other with jealousy; families whose only epic, at the end of the day, is an attempt to buy brand-name clothes and take care of a dying dog. Tolstoy once wrote: “Happy families are all alike; every unhappy family is unhappy in its own way.” I’m inclined to think that Zúñiga’s novel does well-deserved justice to this quote, but nonetheless, something is missing. Perhaps the correct quote would be: “Happy families are all alike; every unhappy family (in Chile, at least) is boring in the same way.”