The Poem Is You: 60 Contemporary American Poems and How to Read Them 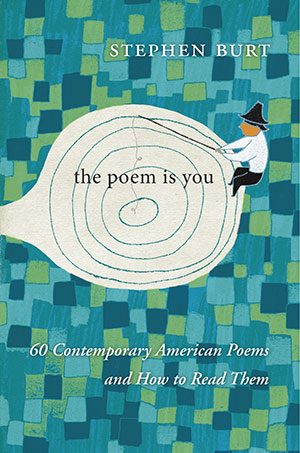 Anthologies bearing the distinct taste of the anthologists are preferable, in my view, to compilations whose editors pretend to be pluralistic in their picks. There is no such thing as a democratic selection process, after all, when it comes to poetry anthologies. Any pretense to inclusivity only harks back to poetry’s own insecurity about its place in the world. Since nobody reads poems, we are reminded often enough, it’s better, the editors assume, to knock down than put up fences. Predictably so, Stephen Burt, the noted poet and Harvard professor, apologizes for not being more inclusive, too, but he really shouldn’t. Despite its limited scope and explicit preference for work championed by the editor himself, this is the best anthology of American poetry out there.

These sixty poems, all written or published since 1980, tickle and trouble and amaze Burt in some ways; if he’d only said that in his introduction, it would’ve been enough to convince me to go along for the ride. Moreover, because a companion essay follows each of the poems, we become privy to Burt’s critical mind while he illuminates how every poem lets us “imagine someone else’s interior life, almost as if it were or could have been ours” and the myriad forms in which “it can reveal, or upend, the assumptions and habits that go without saying when we use language in less usual ways.” The second part of Burt’s framework echoes what we’ve come to expect from his own poems and criticism—who could forget the title of his insightful, not to mention thoroughly entertaining, 2009 essay collection, Close Calls with Nonsense?

Much more than a poetic primer, this volume expands our reading of key American poets, from John Ashbery and W. S. Merwin to Louise Glück and Rita Dove. Figures unknown to nonspecialists, such as John Yau or Harryette Mullen, or Brandon Som, whose terrific first book came out several years ago, are discussed with equal verve. That Burt prefers to unpack unfamiliar poems, rather than anthology staples, is also stimulating. Robert Hass’s “Our Lady of the Snows,” for example, is a fine poem but hardly representative of the former US poet laureate, who “normally writes longer, looser, poems, focused (in general) on the present moment, his family life, his travels, or the news.” Yet thanks to Burt’s one-thousand-word discussion of this twenty-liner, we not only gain new insight into Hass’s range and formal dexterity but also crave to revisit his typical essaylike poems.

Of the sixty poems, there is just one translation: “Incantation,” by Czesław Miłosz, rendered into English by Robert Pinsky and the poet. Like many others gathered here, it is a curious but hardly dubious read that goes a long way in helping to ensure that we not only ponder but also enjoy Stephen Burt’s panorama of contemporary American poetry.