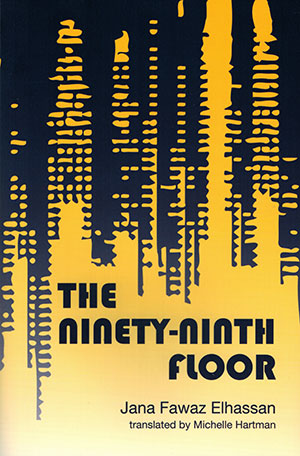 In Jana Fawaz Elhassan’s first translated novel, she explores the entwinement of passion and affection with despair and anger through children of the Lebanese Civil War when revisiting one of the Levant’s bloodiest eras. Set between the year 2000 in New York and early 1980s Lebanon, this multiple narrative penetrates the complexities of Arab identity in both the East and West.

The Ninety-Ninth Floor, which was shortlisted for the International Prize for Arabic Fiction 2015, follows Palestinian Majd, a young man living in New York City as a gaming designer, and his Lebanese lover Hilda—a dancer from a right-wing Christian family. Majd’s traumatic upbringing included the murder of his pregnant mother, while he was left severely physically impaired from a vicious attack during the war. “Under the New York sky, even if I am using my cane as I walk through the streets, feelings of freedom sometimes overwhelm me. I walk at a slow, unhurried pace, and for a few moments absolute weightlessness envelops me: I am this nobody, a stranger, a transient on an anonymous path no one knows a thing about.”

Sitting in his ninety-ninth-floor New York City office, Majd reflects on his present-day life and somber childhood at the Sabra and Shatila refugee camp, where 3,500 civilians were massacred in 1982 by a Lebanese Christian militia. Hindered by the remnants of the war, his paranoia and inner conflicts begin to surface while contemplating his lost Palestinian identity alongside his romance with Hilda; a romance that blossomed under a toxic cloud, partly due to them once standing on opposing politico-religious sides of the civil war.

Elhassan’s narrative alternates between the two lovers, offering a panoramic view of an unorthodox relationship. We also meet Majd’s mate, Mohsan, or Mike as he prefers in the US; a lecherous Lebanese lad who revels in Western liberties. Through Majd, Hilda, and Mike, Elhassan traverses the complex and often-clashing Lebanese/Palestinian generations, cultures, and religions. Detachment/displacement from homeland and the pressure this puts on Arab identity take center stage in the novel.

To a degree, Elhassan follows suit with themes explored in Hoda Barakat’s The Stone of Laughter, Ghada Samman’s Beirut ’75, and Rabih Alameddine’s I, the Divine: A Novel in First Chapters, but at times the overly sentimental language smothers the story’s potential.

Combined with rigid dialogue, The Ninety-Ninth Floor becomes hard to bear at times. Whether it is the translation, the original text, or a combination, the lack of vernacular intervenes with the dizzying nonlinear narrative, while excessive allegory creates a limited scope for literary exploration. As a result, the recurring themes of lost identity, alienation, and displacement become redundant.

The best thing about literature is that you can write about anything. As potent as Elhassan’s subject is, The Ninety-Ninth Floor fails to evoke an emotional response beyond existing works on the same subject.