Monahsetah, Resistance and Other Markings on Turtle’s Back: Lyric History, Poems and Essays by Maurice Kenny 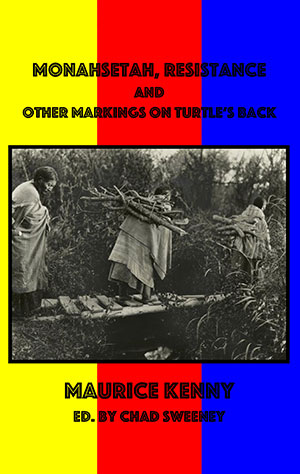 Maurice Kenny’s final collection, a lyric jaunt through history and memoir, serves as an important bookend to his creative legacy. Kenny’s significance as a poet, short-fiction writer, editor, and mentor cannot be overstated. Moreover, he was the first queer indigenous writer whose creative work dealt explicitly with queer indigeneity. Yet Monahsetah offers readers more than just the last words of a major figure in indigenous literature—it is by turns a poetic history and a poignant walk through shards of personal and collective memory.

The nuanced introduction, penned by the book’s editor, Chad Sweeney, Kenny’s close friend and former student, presents valuable insights into both the text and author. Split into two distinct sections, the book is bound together by the poet’s reveries on his own life and on indigenous identity more broadly. Section one constructs the experiences of Monahsetah, a Cheyenne woman born in the mid-nineteenth century, through poems that are equal parts research and beautifully crafted conjecture. In it, readers encounter historically informed reimaginings of Monahsetah’s childhood, young womanhood, eventual captivity under George Armstrong Custer, and little-known fragments of her later life.

However, Monahsetah does not stand alone: her story is entwined with Kenny’s own. For example, Monahsetah’s 1860s childhood appears alongside Kenny’s 1960s, when he “had awakened and was attempting to declare war on inhumanity, the murder of all innocent peoples of both past and present.” Kenny’s coming-to-consciousness about the legacies of settler colonial oppression background Monahsetah’s painful awakening after she survives the brutal settler attack of the 1864 Sand Creek Massacre and is forced to become Custer’s companion. Thus, while section 1 envisions Monahsetah’s life and difficult choices in ways reminiscent of Kenny’s influential Blackrobe: Issac Jogues (1982) and Tekonwatonti: Molly Brant (1992), it also takes a highly personal turn.

The second section gives blood and bone to Kenny’s literary investments, inviting readers to better understand how his “all-consuming occupation” with Tekonwatonti was shaped by family history. Like Kenny’s rejuvenation of Monahsetah, this section turns on issues of memory—what it means to be “forgotten through ignorance.” Kenny demands that Brant and Monahsetah be remembered and hopes the same for his own life and writing. Ultimately, this beautifully assembled collection showcases the undiminished power of Kenny’s poetic voice, reminding us of the impact and reach of his literary genius.