A Listening Wind: Native Literature from the Southeast 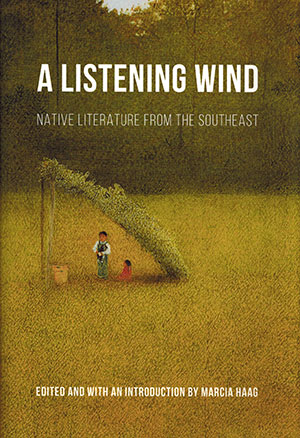 In the introduction to this collection, editor Marcia Haag displays intimate awareness while skillfully articulating the complexities of Native American survivance in the southeastern US. Including work from the Choctaw, Muscogee (Creek), Chickasaw, Yuchi, Cherokee, Koasati (Coushatta), Atakapa-Ishak, Catawba, and Houma, this comprehensive collection contains essays, folktales, hymns, creation myths, prophecies, and more—both from members of tribes forcibly displaced by relocation and those who remained hidden within their ancestral homelands. The editor explains, “In apprehending the literary traditions of the Southeast peoples, we need to take account of the long shared history of these peoples with European and later American whites, beginning before whites represented as profound a threat as they would prove to be.”

The book does not follow a template; storytellers and essayists were not given a theme or prompt. Each included tribe followed its own criteria, editing and deciding which works would be included. The introductions are deeply thoughtful and firmly rooted in the present, written by scholars and community members. These are stories told among the people; they were not conceived for publication of any kind. The author acknowledges this may challenge some readers’ preconceptions, describing her collection by quoting Craig Womack, who argued for Native literature to allow for “Indians doing it their own way.”

Offering a careful balance of traditional and new work, the text is enriched by English and Native-language versions for five of the seven language bases included. Throughout the seventy-seven works, there is a straightforward style embellished with poetic cadences and colloquialisms. These works offer a rare glimpse into a South too often overlooked or forgotten. Pressure to terminate, assimilate, or forcibly relocate these tribal families and communities has been constant for nearly three hundred years, yet the humor and humanity of these often-didactic tales shine through. Tom Mould sets the tone of the book when introducing Mississippi Choctaw oral literature on page 3: “The oral literature of American Indian storytellers can be approached many ways . . . each of these approaches spirals outward exponentially, providing an endless combination of avenues of exploration for scholar and audience alike.”

However, the stories and their tellers never lose track of their roots, which run deep into the land, reaching back into their shared experience and cultural attributes of the Southeastern Ceremonial Complex. Such is Beckee Garris’s Catawba story of how Chipmunk got stripes, which begins in the traditional way: “A long time ago, it is said, the Ancient People told how this is the way . . .” Beyond powerful love and respect for land, water, sky and the plants, animals, and spirits that populate them, these works express proud and distinct worldviews and cosmologies. Their values, humor, and quiet dignity are evidenced in the diverse voices of A Listening Wind, tempered by the incredible resilience they continue to share. Care has been taken to record these gems in a context that respects their individuality and enhances awareness within and without their respective tribal communities.