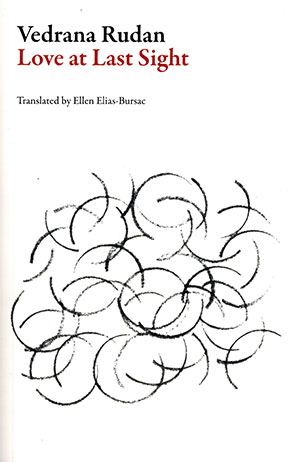 Vedrana Rudan’s new provocatrice, Tilda (unnamed until the penultimate chapter), recalls the protagonist of her first novel, Night, both middle-aged, middle-class wives with a daughter and a lover. Its focus the sexual battlefield—if Love at Last Sight does not, like Night, foreground realpolitik—it censures global institutions for creating an existential void that transforms love into war.

Rudan subverts structure, plot, and voice, employing a quasistructure—twelve chapters—and two elaborate, interconnected quasiplots: Tilda, dead, on a bucking horse, explaining why she killed her husband in order to learn her otherworldly terminus (a final twist transports her from outside the pearly gates to earth); the history of a hunt she and her husband undertook, which resulted in his murder. Pleading her case to invisible judges, Tilda reveals her backstory in a first-person, unparagraphed stream-of-consciousness, its acid humor laced with pain and anger. She manipulates her material, noting “minor digressions,” the need to “get back on track,” and the many inadequate segues, but justifies everything: “It’s tough for me to stick to topic because you aren’t saying anything . . .”

Tilda’s truths—e.g., “Power responds to Powerlessness,” “Man and woman are . . . nothing more than animals,” and women are “the under-est of underdogs on Earth”—announce her central themes. The hunt, a major trope, empowers the hunter and mirrors the quest for trophy mates: a mounted boar’s head embodies men and women emptied of internal lives. But societal definitions—men as “spirit, reason, charm, mind,” women as “tits, cunt, ass, eyes”—leave Tilda feeling “more than just tits, belly stretch marks . . . the fact that I have a cunt says nothing about me.” Confused, angry, yet acquiescing to those norms, she asks, “Am I a person?”

Proclaiming “it’s all biology after all,” Tilda nonetheless indicts an unholy triumvirate—Church, State, and Corporations—for mandating guilt, hypocrisy, and materialism to support a hierarchical global society that compels adherence to dangerous pieties and fosters power struggles in every sphere. Digressions about Albanians and Bosnians working on her new house underscore this; although female, as Croat and boss, Tilda is ethno-economically superior: “I am up, they are down.” Likewise, mocking Croatia’s fervent nationalism, she gleefully staunches her menstrual blood with napkins resembling Croatia’s coat-of-arms: “Stuff the Croatian national colors between my legs?! . . . This is against the law! There’s a Law about the Coat-of-Arms, Anthem, and the Presidential Sash.”

The ugliness of Love at Last Sight—insecure, abusive fathers and husbands, passive mothers and wives, complicit in their own abuse or thirsting for revenge, daughters abused or ignored, vomit, hairy asses, dirty pricks, and orgasms, real or feigned—recalls the works of Genet and Céline, the medium their message. These grotesque images record the death of love, destroyed by that capitalist culture which postcommunist Croatia so warmly embraced. But Tilda’s tragicomic rant reveals her need for real connection and her sense that whatever the system in power, one can choose, if one dares, to become a human being: “A genuine life is marching along, not giving a fuck for what people think.”