The Year of the Comet by Sergei Lebedev 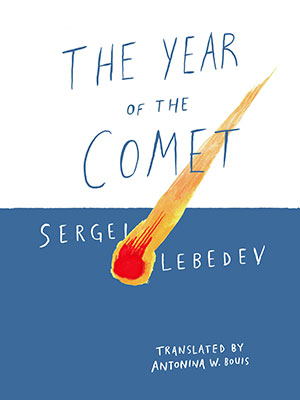 In his second novel, Sergei Lebedev explores the thrills and failures of the late Soviet Union through the eyes of a young boy. Both a coming-of-age story and the tale of a family cut off from its history, The Year of the Comet is a touching portrait of bonds that span generations. The boy’s parents, whose job it is to predict and assess cataclysmic risk, embody the chaos of the narrator’s youth, while his grandmothers—the only central characters with names—each represent a kind of stability and love: “The true right of parenthood belonged to Grandmother Tanya and Grandmother Mara.”

The story takes place right at that moment in adolescence when the infinite goodness of things seems to have vanished but one hasn’t yet learned how adult reconciliation works. The complexity of a world filled with disappointment and doubt (as well as joy) is nearly impossible to comprehend through the black-and-white lens of childhood. This youthful perspective is a useful device that allows Lebedev to implicitly critique the regime through the innocent remarks and observations of a child. This conceit is not without its price—Lebedev’s comments on the inherent differences between children and adults at times feel ungainly and forced, rather than profound. Here and there Lebedev struggles to shed his precocious adult-as-child voice and regain the charming naïveté that propels his narrative.

For all his commendable attempts to dismantle the myths of the USSR, Lebedev never fully questions the basic premise that the republics were equal-member states or that all Soviet citizens had equal access to privilege and power. This is a minor theme, however, and the bulk of the novel remains a comprehensive depiction of the events and objects—so many objects—that comprised the fabric of everyday life in the USSR. All his relatives are permeated with the Soviet order. The older ones, whose lives predate the system, have a different relationship with this form of power. The novel captures their attempt to pass this certain freedom along to him, the youngest one, so that he may be born anew.