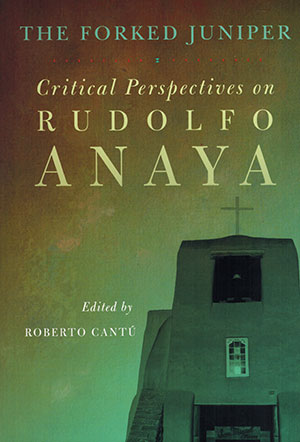 Finally, a gathering of essays on Rudolfo Anaya’s now vast archive of writing that considerably widens the circuitry of engagement with global literary histories. Roberto Cantú brings together a group of critically imaginative, international scholars whose readings no longer tolerate the facile regionalist, nationalist models that have for so long circumscribed our reception of not only Anaya’s work but that of most Chicana/o writers. Finally, a group of scholars committed to exploring the deep aesthetic, philosophical, transcultural histories scribed into Anaya’s oeuvre.

The essays are spectacular, smart, and inventive, offering, as most of them do, detailed analysis of Anaya’s genealogical location within the long history of cultural production and intellectual exchanges across the Americas. This, especially in essays by John Pohl, Spencer R. Herrera, and Enrique Lamadrid. But not only the Americas. María Herrera-Sobek charts the correspondences between Anaya’s mythotheological tropes and those of ancient Greece and Hindu Vedic philosophy and theology. Monika Kaup offers a brilliant reading of Anaya’s writing as part of a long line in the “hemispheric continuities of the New World baroque” and a “mestizo deformation” present in Carpentier, García Márquez, Glissant, and other Latin American writers, artists, and critics of the late twentieth century whose own writing, like Anaya’s, discloses a discursive sensibility reformed by hemispheric renegotiations of subjection.

Many of the essays included in the volume will prove to be classic considerations on Anaya’s global and transnational reach—Horst Tonn, Francisco Lomelí, John Pohl, Heiner Bus, Rosaura Sánchez, and Robert Con Davis-Undiano considerably deepen the complexities between region and the wider constellations of a particular literary production that seek to symbolically resolve cultural ratiocination. Anaya’s writing across nearly fifty years clings to an idea of a mythos that imaginatively restores a despoiled pastoral world at precisely the moment his characters are flung into a future where the capitalist stranglehold destroys traditional habitat, kinship practice, culture, and language. Anaya’s narrative clings to an idea of order in the pastoral brought to the city and put into contest with the circuitries of modernity that, without historical memory, however attenuated, lead to doomed estrangement. These many essays trace this dialectic of material loss over and against cultural presence in the literary imagination.

The essays that Roberto Cantú so astutely brings together in The Forked Juniper will be required reading for Anaya scholars and students. Cantú’s selections, and his lucid introductory essay, offer capacious readings of Rudolfo Anaya’s writing within a trajectory of narrative practice fully engaged in global literary exchange.