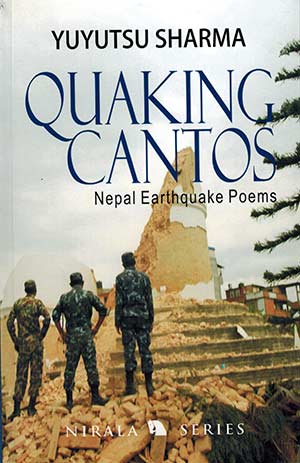 On what seemed like an ordinary day in 2015, a series of rumbles jostled the Nepali region, killing thousands and thrusting countless more into homelessness. An encounter with this disorientating rift produced Quaking Cantos, a visual and verbal response to the wreckage that emerged when planet ground against earth. Much like the title itself, Quaking Cantos—either an epic poem or a quavering song, depending on orientation—is a stunningly heart-wrenching, albeit healing, rendezvous with torment of the highest order. In this compilation, photography by Prasant Shrestha joins the verse of Himalayan poet Yuyutsu Sharma to produce a slim rejoinder to an otherwise blind and mute confrontation with chaos.

Sleek and glossy images smolder from behind the eyes and intersperse this rubblelike arrangement of verse, the cover of which prominently demands an immediate reckoning with unexpected tumult. Bricks, dust, and the unrecognizable remains of a once-normal life confront the reader before the title page to part 1, “I generally do not cry . . .” and once again in the middle of part 2, “Seven Things That Caused the Quakes.” (The title page to part 1 likewise locates itself before the table of contents, another disjunction.) Two etchings of the writer’s face directly follow the epilogue, “A Song of Extinguished Hearths,” and portray the writer with eyes shut and, later, wide open.

With eyes wide shut, emotions tremor from page to page throughout two parts and their summation. Somnolent images of an ancestral grandmother shuffle from one world to the next, leaving Sharma, as it were, to mull over the collective remains of grief under a vast dome of sky. Paradox meets fate when, in an initial poem entitled “Twisted Galaxies,” Sharma soulfully pens: “My bed shakes / as I prepare to reclaim / fractured / fragments of my sleep.”

Like many collections of verse, Quaking Cantos ends in epilogue. What is different is that the grandmother, once again, instructs the scribe to sing, as he recalls, “A song of livid flames / rising out of clay hearths / in makeshift shacks / along the mule paths.” A spiritual quest in search of explanation journeys through a cacophony of images yet ends under the flames of the unknown of what was once possessed but has been lost. Transient and reflective, Quaking Cantos distills loss into revelation as only a shaman and photographer can envisage.