Standing on Earth by Mohsen Emadi 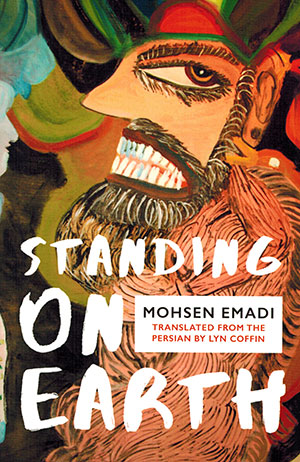 Mohsen Emadi writes a poetry of borders and crossings (WLT, March 2015, 42–44). His poems lay bare a world dissected by boundaries both real and imagined in a language that performs various transgressive acts. Though written in Persian, Emadi’s aphoristic phrasing and terse imagery beckon transport to world literature’s territory and the community of transnational readers who presumably reside there: “I’m standing here to turn over my language. / Everything gets lighter when it crosses the border. / I’m standing here to be translated.”

With Standing on Earth, translator Lyn Coffin has granted the poet passage, giving English readers their first view into the demarcated world as Emadi renders it. The Iranian poet currently resides in Mexico in self-imposed exile. It is from exile that Emadi gazes homeward across the now-impassable frontier, where his less fortunate compatriots have paid the ultimate price for threatening, willingly or otherwise, the established order. Poetry’s mission, under exilic conditions, is to carry names like Abbas Meftahian, “executed by a firing squad,” or Neda Agha-Soltan, “killed in 2009 on Amir-Abad Street in Tehran,” away from the edges of oblivion.

But the poet hardly limits his concerns to the political or physical conditions of exile. Emadi explores the liminal spaces between language and experience, science and aesthetics, the material and the metaphysical, all bifurcations that the poems imagine even while, or perhaps for the purpose of, tearing them down. It is in Emadi’s singular images where poetry’s immateriality and the world’s inescapable physicality converge and collide: “Your tears pass / from Newton’s nightmares / into my poems, / the words in a river of tears / hatch. // O, the cold shroud of the paper, / o, the white eternity, / o, the absolute snow.”

At their most lyrical, the poems invite us to experience the world as language, to imagine poetry’s silences as the whiteness of falling snow. The material conditions of Emadi’s world—and I daresay of ours—seem unlikely to improve in the foreseeable future, but the poems remind us of our potential to envision other worlds: “We are standing on earth, imagining another paradise.”