Moving the Palace by Charif Majdalani 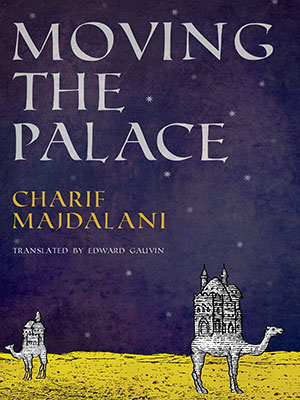 Moving the Palace won both the François Mauriac Prize from the Académie Française and the Prix Tropiques, so one opens its pages with high expectations. It says something that a perusal of the novel’s opening paragraph assures the reader these expectations will not be disappointed. Moving the Palace’s title refers to the return of a certain expatriate Lebanese, Samuel Ayyad, from Sudan to his home country.

Early in the last century, Ayyad, “Westernized, Anglophone, and Protestant to boot,” heads to Sudan to make his fortune, arriving there at a significant moment in that country’s history: Anglo-Egyptian armies have restored Sudan to its more powerful northern neighbor, itself still, of course, very much under British sway, after the revolt of the Mahdi, but imperial control has not yet been fully established; there is room for individual initiative and adventure. Ayyad acquires the palace of the title and decides to break it down into its constituent elements and take it home on the backs of a fleet of camels. Triumphs and mishaps ensue, but the final pages narrate Ayyad’s arrival near Beirut and his meeting the young woman he will marry. She will become the grandmother of the very narrator attempting to re-create imaginatively the experiences of his ancestors, with little to go on.

It is one of the novel’s pleasures that its story takes place against pivotal moments of the half-mythic history of northern Africa and the Middle East: in addition to the aftermath of the disaster at Khartoum there are references to “the fabulous encounter between the black tribes and the crests, crimson capes, and eagles of Rome,” to Stanley finding Livingstone and Emin Pasha, and to the Arab Revolt of 1916, with Samuel Ayyad encountering T. E. Lawrence in an (apparently inconsequential) meeting in Prince Faisal’s camp.

Another reliable source of delight is Majdalani’s writing, constantly alive and entrancing in Edward Gauvin’s translation. One reads of “a group of riders [getting] a shard of sunlight in the eye . . . gazelles galloping by, slow snooping hyenas, . . . stilted ostriches”—and much, much more.