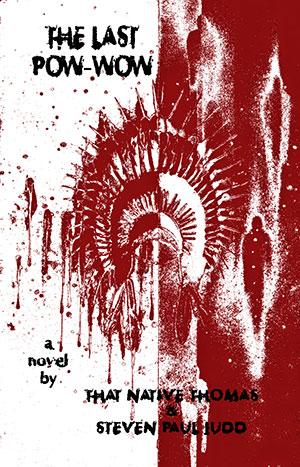 In The Last Pow-Wow, by That Native Thomas and Steven Paul Judd, a Native American baby is born with powwow regalia growing out of his skin. Feathery bustles sprout from his arms, and, as he matures into a young man, a line of porcupine hair emerges from his head. Yet this young man is one of the least bizarre creatures to inhabit this magically realistic story. Thomas and Judd’s world is full of coyote men, owl witches, Crazy Horse’s dog, and even Native Americans who have never been to a powwow. In chapters that are slyly hilarious, readers watch as all these characters make their way to the powwow in the title. Only full-blooded Native Americans will be allowed into the gathering. This exclusion is unusual because powwows represent a “neutral meeting group . . . where all Native Americans are welcomed,” the reader is reminded.

The authors seamlessly incorporate Native American history and establish the context for the stories that play out in and around the powwow. There is a riveting description of Abraham Lincoln’s real-life role in the 1860s Dakota Uprising, which should be required reading for every fifth grader in the United States. It provides a perspective on President Lincoln’s legacy that is darker and more complex than the version most of us learned.

That Native Thomas is the author of the children’s book series The Underwear Boy Warparties, about a young Native American superhero. The Last Pow-Wow moves quickly and would keep a younger reader engaged, but chapters involving death and characters getting familiar with each other make this a book for adults.

Biblical themes mix with familiar Native American icons like the trickster coyote, Wendigos, and medicine men, but the authors of The Last Pow-Wow are doing more than presenting a grand entry of Native American tropes. Conflicts between full-blooded and mixed-blood Natives and between magical and realistic creatures mirror the struggle for an authentic Native American identity that is less about blood quantum and more about shared struggles. In this era of tribal disenrollments and #LateralOppression, it is a needed perspective.

If you’ve never been to a powwow, The Last Pow-Wow will make you want to find the nearest one and drive there. If you’ve been to five hundred powwows, Thomas and Judd’s book will remind you of the characters who make real powwows magical events.