Bricks and Mortar by Clemens Meyer 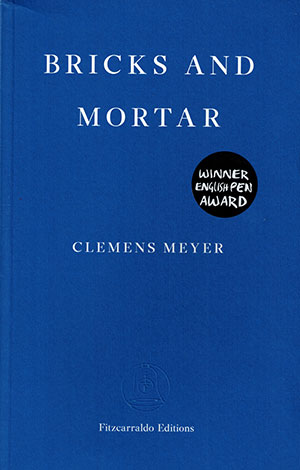 The phrase “bricks and mortar” refers to the real estate in an east German city, Meyer’s Leipzig, which is likewise the setting for his earlier novel, As We Dreamed. Since around 2000, this real estate has been controlled by a consortium of landlords who’ve profited nicely from their tenants’ rents.

It is the voice of one of these tenants talking to herself (not quite but very like interior monologue) that opens what will turn into a polyvocal chorus. It is 2010, and business is booming in the “nocturnal services” Babsi (her “stage name”) provides. Actually, she provides these services at any time of her choosing—she is totally her own boss as an independent contractor. She can even choose with whom she contracts because the two dominant landlords have come to a happy accommodation, with the city split between the Angels (Hell’s) and “the firm” (the “Old Man’s”), and she rents from the latter.

While we cannot speak for the Angels, we do know that the Old Man does nothing that is not absolutely aboveboard. Arnold Kraushaar (aka AK) has been called “pimp,” but “no, no,” he says. He simply rents apartments to women who have chosen the profession of prostitution. Prostitution was fully legitimized in 2002 by policymakers sagacious enough to foresee the resulting tax revenue windfall.

Chancellor Helmut Kohl had promised that unification would produce “blooming landscapes,” and this business has certainly flourished in the formerly poor East (under whose previous Communist regime prostitution did not, of course, exist) now that it has opened to the miracle of the market. Meyer illuminates this radical economic transformation with trenchant irony: AK was doing all right in the 1990s with his games arcades, but for real entrepreneurial success in this new economy he knew he needed new skills. What more fitting than an MBA, that capitalist credential par excellence?! His concentration on real estate and tax law enables him to serve his clientele much more rewardingly as a real-estate broker and income-tax advisor.

Many readers will be reminded of Döblin and Hubert Fichte, who explored similar shady milieus, but Meyer uses his to create what he calls a “mythology,” a lapidary allegory of contemporary capitalism. Everything is for sale—you can have just the woman (and services!) you want. You want Lolita? Here’s child labor at its criminally worst.

There is no plot, but there is a clear development—the economic development of the former GDR is personified in the Entwicklungsroman of Arnold Kraushaar: his rise from shifty bit player in the demimonde to respectable real-estate baron, ascending via that MBA, a model mentor, political networking, and so on. And like those who know best, he’s learned that capitalism is most profitable when, instead of competing, you buy cooperation to monopolize a field.

While all the “tricks of the trade” prostitutes advertise (another of AK’s services) are described, there is no pornography here. With the conceit of prostitution as the quintessential expression of capitalism, though, Meyer savages all forms of exploitation with darkly perverse humor. As befits the span of subjects and voices, the language ranges from the arcana of high finance and law to the street argot of the underworld. This language plus all of Meyer’s wordplay make Katy Derbyshire’s translation of this shadowland symphony a positively gargantuan achievement.