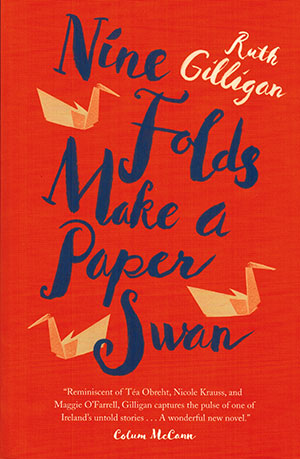 Taking on James Joyce is no small feat, but Ruth Gilligan pulls it off masterfully in her own distinctive voice while sprinkling in Samuel Beckett, Seamus Heaney, W. B. Yeats, Colum McCann, and Anne Enright for good measure. Nine Folds Make a Paper Swan is so full of Irish literary allusions one wants to spend the night in Trinity College Dublin Library soaking them all up.

Gilligan presents the marginalized perspective of Jewish immigrants alongside that of Irish Catholics in three braided storylines extending more than a century. Ruth Greenberg, age eight, accidentally arrives in Cork with her family in 1901 from Lithuania, fleeing anti-Semitic pogroms on a boat supposedly headed to New York. Carrying a compass yet seeking direction, she comes to live in the heart of Ireland’s Jewish community: Dublin’s Clanbrassil Street, home to Joyce’s Leopold Bloom, a Hungarian immigrant in Ulysses. Both Bloom and Ruth’s father tried to market failed plays.

Zoom to 1958. Shem Sweeney’s parents leave the thirteen-year-old in a Dublin mental institution after he went mute to protect his mother. Shem (think Finnegans Wake) transcribes the fading romantic memories of his Jewish roommate, Alf, as if he were Krapp and it was Beckett’s last tape.

Tempus fugits to 2011 in London, where Irish-Catholic Aisling Creedon from Dublin lives. Her Jewish boyfriend brings up marriage, if she converts to Judaism. Aisling returns home to ponder her heritage in light of the proposal. Bloom again—born Jewish and raised Protestant in Ulysses, he converted to Catholicism before marrying.

Marriage is a recurring theme in Nine Swans. The origami figure symbolizes eternal love because swans mate for life. What does it mean if, as Ruth’s mother broods, the glass refuses to break under the chuppah, though? Gilligan’s characters spend their lives searching for identities. How large a role does religion play in self-concept? Is it possible to make a leap of faith? The stories echo as the plot reverberates, giving a nod to The History of Love, by Nicole Krauss.

Gilligan’s tenderly expressive novel is a brilliant riff on her Irish literary heritage. At times, she’s difficult to read, just like Joyce and Beckett, but she’s not timid about matching the crudity in their writing. Yeats looms in other sections: “Tread softly because you tread on my dreams.” Enright’s themes of Irish family relationships past and present emerge. Heaney’s poetry flashes: Ruth digging peat and her playwright father maintaining hope in the face of failure.

Gilligan’s epigram is a quote from Colum McCann’s Zoli about latent stories locked inside memories. Indeed, ferreting out tales seems to be the driving force behind Nine Folds. Old book marginalia hold one woman’s account. Ruth tells her father’s stories to calm mothers giving birth, eventually recognizing her own imagination.

Nine Folds Make a Paper Swan resonates with the contemporary zeitgeist of immigrants seeking refuge around the globe. “The world’s more full of weeping than you can understand,” Yeats wrote. Yet Ruth Gilligan did, and she put that understanding in this novel.