Witness: Inside Jehovah’s Witnesses inside Catholic Poland inside a Gay Life by Robert Rient 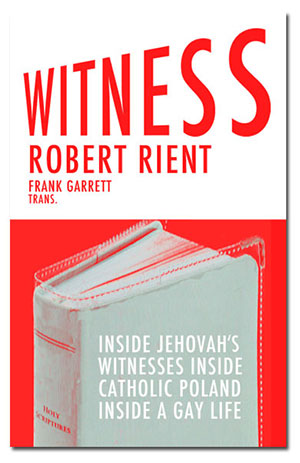 To many, the Jehovah’s Witnesses are known for knocking on doors and leaving the religious tract The Watchtower in waiting rooms and laundromats. They have also been the butt of jokes and the object of ridicule. Witness Tina Fey’s joke that “Gay people don’t actually try to convert people. That’s Jehovah’s Witnesses you’re thinking of. ”

Witness is the story of Luke, a Polish boy born into a family of Jehovah’s Witnesses, nine years before the sect was officially recognized by the Polish government, and the ostracism he experiences throughout his life: first, as a member of a “feline faith” in the predominantly Catholic Poland of the 1980s and 1990s; and, later, at the hands of that same faith and his family after deciding to leave the church.

Almost schizophrenic in its apparent lack of order, Witness is told in three interpolated voices. The first voice is that of the young Łukasz, which the translator domesticates to Luke. Narrated in present tense, Luke’s voice makes the reader witness to a young boy who struggles to be accepted while adhering to the religious strictures of a fundamentalist sect that mark him as different from his classmates as well as his fellow Poles. More importantly, however, Luke knows he is different even from other Witnesses. Earnest in his devotion, Luke does what millions of teenagers do: he embraces his faith as a means of repressing everything that the faith tells him is sinful, especially his homosexuality. “Defellowshipping” is a pall that hangs over Luke’s existence. “At night I sit in my tent and write, ‘I don’t accept myself. The knowledge of who I am hurts too much.’” At the tender age of eleven, young Luke writes a poem. Aware that Witnesses are not allowed to engage in such worldly pursuits, he signs the poem Robert Rientowski; in doing so, the second voice, Robert, is born. Narrated in past tense, Robert serves as both alter ego and mediator, between past and present, between actions and thoughts, between life inside and outside the denomination. Finally, Rient employs a third, neutral voice, Witnesses, to explicate the sect’s dogma and teachings.

This apparent disorder serves an important narrative function: mirroring the chaos of identity that the troubled Luke experiences as a young man desperate for self-integration. Self-integration, however, comes at a high price. Luke Zamilski must cease to exist for a wholly integrated Robert Rient to emerge. “He gave birth to me correctly. In pain. He is my third and only parent. He left no commandments but one: that I wouldn’t wait to begin living like he did, that I would live.” Rient, who today is a respected Polish psychologist, does a masterful job interweaving these disparate voices.

Memoirs can be tricky, often defying facile classification. Witness is no exception. Is it a memoir, or is it reportage? Does it even matter? For the late William Zinsser, “A good memoir requires two elements—one of art, the other of craft. The first element is integrity of intention. . . . The other element is carpentry. Good memoirs are a careful act of construction.” Both elements are present in Witness.

It is difficult for me, as a student of literature, to resist the temptation to connect literary dots, no matter how distant. There are elements of this book that evoke Gombrowicz’s Diary. The comparison is imperfect, of course, but it bears making. “I ought to treat this diary as an instrument of my becoming before you. . . . I would like people to see in me that which I suggest to them,” Gombrowicz writes. This, of course, is the function of every memoir: obliging the reader to see the subject/object of the memoir in the way she or he wishes to be seen.

I reached out to Frank Garrett to ask about the difficulty of translating such a narratologically complex text. He replied, “The three main voices were relatively easy after the first few drafts. Luke always seemed to be tagging along with Robert, who was much more adventurous, so for his voice I relied more on contractions, slang, and a simpler vocabulary, one that was particularly influenced by the Jehovah’s Witnesses’ lexicon. Robert primarily is our contemporary looking back on a younger ‘self,’ so his voice was more educated and detached, sometimes even clinical. The voice of the Witnesses was confined by its literalist, fundamentalist mind-set. A handful of times I had to consult with the author to verify who was speaking and during which time frame. Sometimes his answer to my straightforward question, ‘Is Robert or Luke speaking here?’ was something along the line of, ‘Yes/both/neither.’”

Garrett is to be commended for his attentive translation. Rendering faithfully a single narrative voice can be a challenge; rendering multiple voices as ably as Garrett has is nothing less than praiseworthy.