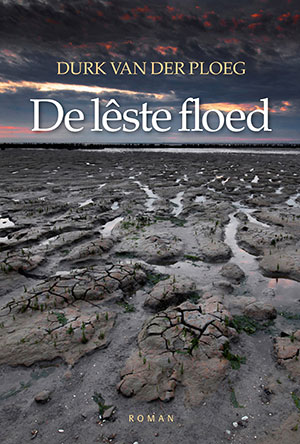 In his eighties now, Durk van der Ploeg shows little evidence that he’s losing his literary touch. His latest, De lêste floed (The last flood), brings the reader back to familiar Van der Ploeg territory, where the windswept, forsaken area near Friesland’s northern seashore often serves as an apt metaphor for its isolated settlers waging an ongoing struggle for survival.

Conflict drives most stories, and, with Van der Ploeg, conflict usually entails nature, others, and self. In De lêste floed, Tjserk Vogel is in conflict with all three. He spends his life, as did his father, trying to reclaim slices of land lost to the sea during violent storms in the past. A solitary figure, he struggles in the muck from early morning light till dusk, obsessed with the dream of expanding his land. But his single-minded, futile obsession turns his heart into the slimy swamp in which he labors every day, placing him in destructive conflict with his long-suffering wife, his two sons, and ultimately himself.

Tjserk’s second son, Arjen, the narrator of the novel, is the most wounded victim of his father’s inhumanity. Rejected and disowned already as a young boy, he carries that soul-scarring curse with him for a lifetime. The years add more: the wife he loved divorces him; the daughters he loves drift away; the brother he loved mysteriously disappears on a voyage to South Africa; the mother he loved dies of lung cancer; the father whose love he always needed commits suicide.

Predictably for a Van der Ploeg “loser,” “Grief, anger, doubts, and disturbing dreams roar . . . over me like an avalanche.” Depression and despair nearly push him over the edge, and one too many an interior monologue indulges in excessive lamentations over the woes of his defeat. But what makes Arjen remarkable is that he finally refuses to accept defeat. In retirement he finds himself irresistibly drawn back to his roots, searching for the home he never really had, like Hesling Alberda in Sykjend nei it lêste hûs (Searching for the last home), driven by “a desire to have something of my own, something I could call mine, that would make me feel safe and salvaged and human, yes, maybe something that rises above the material, something you cannot touch, but that gives emotional comfort, something you carry with you in your heart, something that looks like love.” It’s that quest for wholeness Arjen’s been pursuing his whole life which, in the end, saves him.

Through constant flashbacks, past and present are inextricably intertwined in this novel, as, we come to realize, they are indeed in our own real lives. Here Van der Ploeg proves himself once again master of the human drama of ordinary people who often turn out most extraordinary, striving for significance against forces that would diminish, defeat, and destroy.