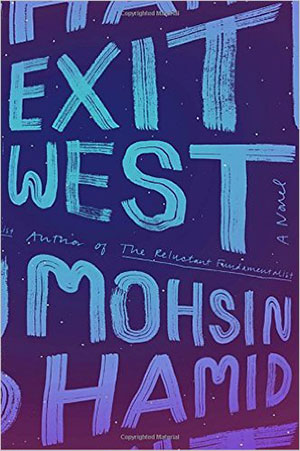 Mohsin Hamid’s latest novel explores the tender and tenuous relationship between Nadia and Saeed, young adults coming of age during a time of strife in their unnamed home country. Their stories begin before they were born as the reader learns about what the world looked like for Saeed’s parents—and how he came to be. By the time Saeed and Nadia meet, both are comfortable in their stations in life. Nadia is a fully covered woman who surprises Saeed when he learns she rides a motorcycle and lives on her own, bucking the norms he assumes she follows based on her dress.

Their tentative relationship is both strengthened and weakened by the civil unrest that begins to permeate their formerly quiet city. When bombs disconnect them from their phones, the budding couple cannot speak to each other. Meanwhile, their desire for each other grows exponentially due to their forced separation. When terror strikes Saeed’s family, the young couple decide they must take advantage of the “doors” that pop up around town and that lead people into another country.

When Saeed and Nadia walk through the first of many mystical doors, they arrive in Greece, where they are introduced to the life of a migrant. They choose to treat this first stop as a tourism trip, during which they sightsee and make a few friends. But when Greece begins to pressure the migrants, the couple enter another “door.” They realize they are in London. The story continues as the couple move more and more west until their story ends in Marin, California.

An extended meditation on the challenges and dangers of migration, Exit West allegorizes migration through its picaresque love story. The novel works to show the microcomplications of migration while nations argue on macro terms. Hamid humanizes a migration crisis that has become background noise to those not living it. How else can one describe the lack of worldwide outrage and compassion such a migration should cause? Hamid summarizes the nature of migration when musing on Saeed’s decision to leave his father in the war zone when the latter refuses to depart from the land where his wife is buried: “For when we migrate, we murder from our lives those we leave behind.” In the end, Saeed and Nadia learn more about themselves and their relationship, and much is left behind upon their arrival in the West.