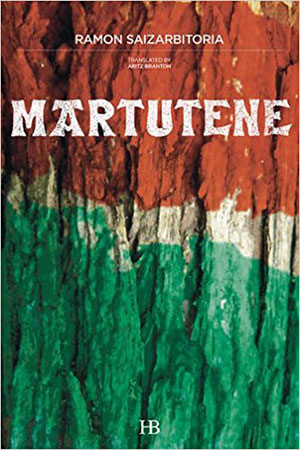 Invoking a mystique of the real in the tradition of Another Country, L’Éducation sentimentale, and Ulysses, Ramon Saizarbitoria has written a contemporary novel of ideas depicting everyday life in the Basque Country.

In 2011 a constellation of relationships takes shape among a cluster of persons residing in the Martutene district of Do-nostia (San Sebastián): the haut bourgeois Martin, a Flaubertian novelist who tinkers with his prose “like a cat playing with a dead mouse”; Julia, the mother of an ETA martyr’s teen namesake, Zigor, who left her government job to become Martin’s translator and muse; Abaitua, a senior gynecologist at a large public medical facility, who entered on his profession “to get to know women better”; Pilar, unhappily married to Abaitua, an heiress and neurosurgeon who sits on the board of directors of a family foundation; Harri and Kepa, satellites of the two couples, whose orbits intersect when Kepa pushes a copy of Max Frisch’s Montauk into Harri’s hands while she helps him collect his spilled books on the floor of a jetliner as the passengers embark; and finally the ingénue Lynn, a young American sociologist in residence at Abaitua’s hospital, who seems to stride off the pages of Montauk and into the penthouse flat that she rents from Martin.

The couples at the center of the book personify contrasting sides of human nature—Martin and Julia represent the artistic, Abaitua and Pilar the scientific—at the confluence of multiple currents of Basque life: culture, love, politics, law, religion, government, medicine, business, economics, history, geography, and language meet in the two relationships as they change over Martutene’s eight hundred pages. Fiction is truth in this world, as when Martin discusses a character that Julia inspired him to create, and the omniscient third-person narrator states that “they didn’t speak for a long time after that,” meaning both the characters in the story and in the story within the story. The people of Martutene become as real to us as their stories are to them.

With his English version of Martutene, translator Aritz Branton performs a valuable service by providing broader access to an essential work of Basque literature, and by offering the anglophone public access to a work that combines emotional range, encyclopedic scope, and epic scale with an excellence that is rare in any language.