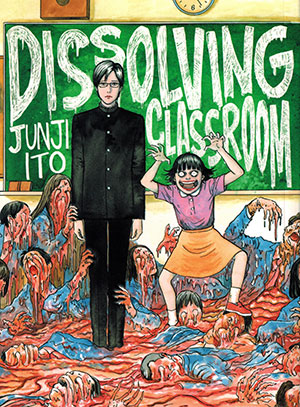 Dissolving Classroom is the sixth volume to translate Japanese mangaka Junji Ito’s probing visions of the horrifying and the weird into English. Despite its title, Dissolving Classroom departs the school setting by the end of the first of five interlocking stories to explore a nightmare landscape of devil worship, dissolving bodies, brain-slurping sisters, public apology, and the quotidian dangers of human interaction.

The manga tracks as everyone met by high schooler Yuuma Azawa and his middle-school sister, Chizumi, dissolve or are disfigured by the “evil electromagnetic waves” connecting Yuuma and the devil. Yuuma melts brains by apologizing to people (usually for his sister’s stalking habit) or praising their beauty, providing Yuuma exquisite pleasure as his connection with the devil grows stronger. Exploiting a theme of unnatural sickness running throughout Ito’s manga, the result is an epidemic of people dissolving across Japan.

Death by apology and praise in Dissolving Classroom becomes the locus of critiques of contemporary Japanese society. Chizumi, for example, is at her most monstrous not when licking “people juice” but when she dolls herself up for a crush, a gesture to the perversity of adolescent girls’ sexualization. Public apology is equally lambasted as the manga is bookended with public apologies by Yuuma that lead to disastrous consequences and that question the sincerity and purpose of apologies by public figures that have become popular in Japan, for example J-pop singer Minami Minegishi’s 2013 filmed apology for having sex with her boyfriend.

But while Dissolving Classroom offers some poignant critique, it is atypical of Ito’s oeuvre. As an artist, Ito’s horror departs from fare that merely shocks, grosses out, and makes uncomfortable as the genre’s final end. Instead, his horror often lies in the weird, in the Lovecraftian confrontation with the unknown, the unnamable, the unfathomable. Sometimes his weird is technoscientific (Gyo), but more often it is a supernaturality arising from the apparently nonsupernatural, such as group violence (Tomie) or the shape of a spiral (Uzumaki); it is a weird rarely explained. But in Dissolving Classroom the devil (goofily Baphomet-styled) is disappointingly named again and again as the source of horror, robbing its power to inscribe the terrifying wonder that enlivens Ito’s best work.

What’s left is visions of dissolving brains oozing from face holes. These images are not without the sadistic pleasure that Ito’s grotesque art beckons us to enjoy, but as a narrative that too easily names its horror as the Christian figure of absolute evil, Dissolving Classroom proffers a simplified moral binarism that the existentially complex moral and ethical ambiguities of Ito’s other work thankfully eschews.