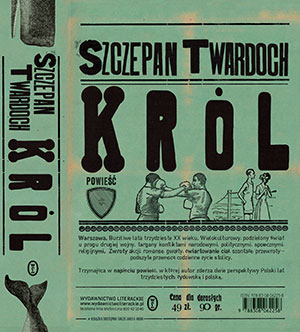 The year is 1937. For nearly twenty years, Poland has been independent after a century and a half of foreign occupation. As Hitler casts an ever-longer shadow eastward, Polish democracy withers on the vine. Warsaw is divided: Jew versus Christian, socialist versus nationalist, gang versus gang. Jakub Szapiro is a Jewish champion heavyweight boxer turned righthand man to the crime boss Jan “the Godfather” Kaplica. And he dreams that one day, in this city, he will be king.

Such is the premise of the latest of Szczepan Twardoch’s dark historical novels. Debuting last fall, Król (The king) has become a runaway best-seller in its home country. With complex characters, a rich noir atmosphere, and an action-packed story, it is one of the most compelling novels to have come out of Poland in recent years.

We see Warsaw from the perspective of young Moshe Bernsztajn—a teenager whose father, Szapiro, kills, only to take the boy under his wing. Forty years later in Israel, Bernzstajn tells us the story of his initiation into the Warsaw underworld. Kaplica’s gang battles fascists on the streets as the government teeters on the verge of collapse. As anti-Semitism metastasizes in Polish society, Szapiro and his Jewish compatriots debate whether to emigrate to Palestine or stay and fight. Meanwhile, the crime bosses murder, extort, and place their bets on which political leader will come out on top. And above it all floats a mysterious sperm whale with deep, burning eyes.

Bernsztajn sees Szapiro as a man fighting both to save Warsaw and to rule it. But Twardoch does not romanticize the gangster—no one comes out of this book with clean hands. Alongside the gritty tone, Twardoch imbues every page with an irresistible sense of style: clothing, cars, guns, blood, and sex are all described in intricate, loving detail. The effect is Tarantino-esque, artfully reshaping excess into an uncanny beauty.

Szapiro’s Warsaw—a multicultural, multilingual pressure cooker of a city—was destroyed for good in the Second World War. Twardoch does not claim to offer a documentary reconstruction. As the narrative proceeds, he moves away from realism, toying with questions of imagination and forgetting. Ultimately, The King seems a study in extremes: love and violence, sympathy and revulsion, fantasy and reality. That Twardoch can balance these extremes is a testament to his skill.