Against the Loveless World by Susan Abulhawa 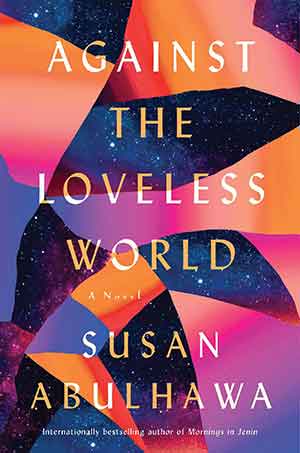 SUSAN ABULHAWA TITLES her latest work with the words of James Baldwin. One book at a time, she continues to personify the Palestinian story in masterful prose. This third novel draws on her roots as a child of refugees in the 1967 Six-Day Arab-Israeli War.

Mornings in Jenin (2010), translated into thirty languages and now in development as a television series, brought the tale of Amal, born in a Palestinian refugee camp. The Blue between Sky and Water (2015), now in twenty languages, follows the Barakas family in the Palestinian diaspora after Israel’s 1948 creation.

This time, Against the Loveless World introduces Nahr, a resilient but exhausted woman trying desperately to survive forces sweeping her from place to place—Kuwait, Iraq, Jordan, and Palestine—and it may be Abulhawa’s strongest book yet. All three novels share similarities. What’s different here is the fascinating method.

Gray-haired Nahr begins: “I live in the Cube.” Articulating her memoir is difficult, however, since the Cube is an Israeli solitary-confinement cell where she’s been for years. She talks to prison walls until a sympathetic guard brings her two pencils and a notebook. Feeling “an irrepressible instinct to account for life,” she fills three thousand pages.

Starting with her birth in Kuwait (“a country that abandoned us”), Nahr describes girlhood in a patriarchal society—followed by arranged marriage and swift abandonment. She’s blackmailed into well-paying escort work, but after the US invasion of Iraq, her family flees to Jordan, where they become refugees again. Seeking divorce, Nahr travels to Palestine (no easy task). There, in her ancestral homeland, she falls in love.

Slowly, Abulhawa reveals secrets, building her story around a hexahedron, perhaps a metaphorical nod to both Black Cube (the Israeli private intelligence firm) and a psychology-insight game popularized by Annie Gottlieb’s 1995 book The Cube (based on kokoro, a Japanese concept of mind or spirit).

Alternating Nahr’s backstory with present-day Cube chapters, Abulhawa applies geometric properties as well as architectural principles. Subtitles represent each square side of six faces: East, West, North, South, Up, and Down, plus The Space Between.

Abulhawa brings a cube’s ancient symbolism to bear on what she’s rendering. Facing sides are parallel, all equal, with three-dimensional stability. One of five Platonic solids, representing earth, a cube as prison cell separates public and private spaces—yet Nahr has no privacy. Architects consider the sun’s path across the sky when orienting their buildings. Abulhawa locates the Cube’s window high, disorienting Nahr: “time is immeasurable in here.”

Metaphorically, Abulhawa explodes the cube, allowing the shape’s language to editorialize in fiction akin to the way designer Yannick Martin did in architecture.

How neatly Abulhawa embeds chaos theory: “Our dance is about chaos and anarchy . . . the antithesis of control.” Nahr names her shower “Attar,” an apt reference to the Persian poet but also suggestive of Jon Stewart’s 2014 film, Rosewater, about an Iranian prison.

The novel’s title stems from James Baldwin’s 1962 Progressive essay, “A Letter to My Nephew.” Discussing it with Nahr, a character says: “Reading Baldwin ought to be slow. Every sentence beckons not only the mind, but also one’s heart, history, and future.” They talk about surviving colonialism, loving ancestors, and relating to Israelis.

Abulhawa sums it up: “This is what it meant to be exiled and disinherited—to straddle closed borders, never whole anywhere.” Against the Loveless World is a compelling novel by an author who’s lived Middle East headlines.