This Is One Way to Dance: Essays by Sejal Shah 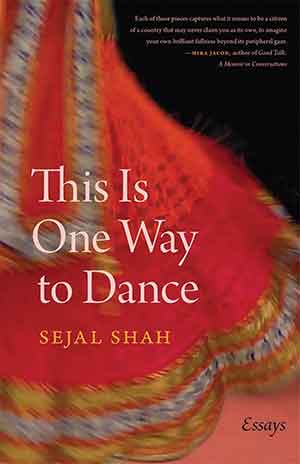 THE MOTIF OF DANCING is central to Sejal Shah’s memorable collection of essays about growing up “Indian outside of India, in non-Indian places; about the formation of ethnic identity in small cities and towns in the United States, away from urban centers.” Dancing, spinning, and twirling don’t fix a body in place; they worry boundaries and borders. These elements define Shah’s forays into creative nonfiction, which encompass “the wildest field of voice, thought, and performance.” The essay, for Shah, is “hybrid and nonbinary, the aesthetic as queer,” and probes self-definition while aiming for invention. The essays themselves, written, rewritten, and revised across different moments in time, become simultaneously a mode of invention and of excavation.

Consider the essay titled “Matrimonials: A Triptych,” which connects the motif of dancing to the two other dominant themes of the book: marriage and eating. Beginning with a reminiscence of her brother’s wedding in 1992, Shah moves to a discussion of her visceral attraction to the Mira Nair film Monsoon Wedding, which made her and her friends want to “unwind and expend the coiled energy built from listening to electronic dance music.” However, Shah’s attraction for the film and its representation of big Indian family weddings also evoked for her the wistful experience of being “Indian in Amherst,” a “parallel universe to the public schools” where she and her siblings were among a handful of Indians. Weddings meant food and dancing.

Later, while she was in graduate school (1997–2002), attending weddings reminded her that “there was a wider world out there—multilingual, vibrant, layered—every riotous color, every ephemeral dance.” No wonder then that these wistful memories of weddings left a mark on her writing. Rewatching Monsoon Wedding in 2018 made her realize what she had persistently wanted to “create and represent” in her writing: “context, aesthetic, multiple languages . . . a diasporic backdrop for my work, for how I hoped my writing might be read and situated.” Dates—1992, 1997–2002, 2018—function as temporal markers in a continuing dance that excavates and returns with new insights to earlier experiences, while keeping doors ajar for new forms of self-creation and recognition.

In essays like “Kinship, Cousins, and Khichidi,” remembered experiences of eating and cooking are foregrounded as Shah kaleidoscopically reevaluates the centrality of such activities to her mutating sense of identity. While she finds cooking to be an intimate kind of social relation, when she was younger, cooking “seemed to be about work: more and more work, always for women.” But later in the same essay, which, like “Matrimonials,” skips back and forth across time and places, Shah concludes: “Even now, I find it difficult to eat alone—it’s not how Indians eat, I think. It’s hard to enjoy food without talk. Eating is communal: what is food without sharing, without laughing, without pressing seconds on one other?”

These probing dances that re-turn and redefine, while still encapsulating the germs of the prior affective experience, come full circle in the essay where Shah reflects on her own wedding: “Saris and Sorrows.” Life, she says, is not only about weddings. It is about mundane practicalities like cooking and dishes, writing, determining the compromise temperature in the room. Yet there is something about weddings that still retains the power to astonish—“the threshold, the intention, the cusp; the crucible, the gathering, the hope.” While her resonant prose powerfully registers loss, the persisting power to astonish and be astonished enables her to “dwell and revel in the spaces between.”