In the Land of the Cyclops by Karl Ove Knausgaard 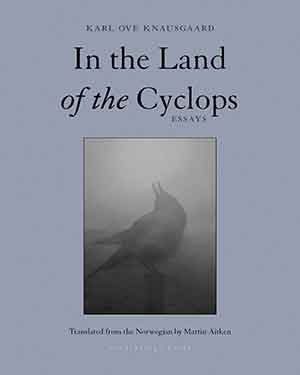 IN HIS NEW COLLECTION of essays, In the Land of the Cyclops, Karl Ove Knausgaard continues to use writing as a process to defamiliarize and move beyond the world as one knows it. The subjects of the essays for the most part center on visual artists and writers: Cindy Sherman, Gustave Flaubert, Anselm Kiefer, and Knut Hamsun, among many others. Knausgaard approaches these subjects directly, eschewing a dense critical style in favor of the personal and rigorous fascination with the subject itself that informed his monograph on Edward Munch, So Much Longing in So Little Space.

As with Munch, Knausgaard at times vanishes in his intense scrutiny of his subjects. Those familiar with Knausgaard’s epic My Struggle will find his shift into essay writing a natural evolution. That series was defined by two separate impulses, the first being the excavation of Knausgaard’s personal life in which he chronicles the challenges and mundanities of modern life in exacting detail. The second impulse, however, tended toward expansive inquiry, most notably in the last volume, where a four-hundred-plus-page essay on Adolf Hitler is tucked away in the middle of the book. Both impulses are on display in this collection in which Knausgaard continually returns to thoughts of boundaries, the absolute, differentiation, sameness, and defamiliarization, both in terms of his subjects and his own life. His strategy, irksome to some but exciting for others, is to bring the reader right up to the precipice of insight before lodging a question and disappearing.

Knausgaard is less interested in answers than in authentic engagement with the world. This appears to be his primary interest as a writer and is summed up neatly in an early essay where Knausgaard recalls his joy as a teenager flying on an airplane for the first time. “I was sixteen when I last felt something I’d never felt before,” he recalls. “It was sensational. I was looking out the window of the plane, looking at the clouds, the landscape beneath them, when I got this intense feeling of the world. It was as if I had never seen it before then.” In the Land of the Cyclops is another worthy addition to Knausgaard’s oeuvre that aims to recapture this intense feeling and to see the world anew.