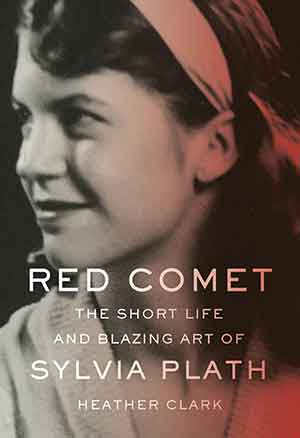 OVER THE YEARS I’VE approached each new biography of Sylvia Plath hoping for a fully comprehensive account of her life that would portray her as the person of extraordinary intellectual and aesthetic accomplishment that she actually was rather than as the madwoman who killed herself. Heather Clark’s Red Comet is the book I’ve been waiting for.

Meticulously researched and conceived with a sympathetic, sure-footed grasp of her subject, Clark has created a glass-smooth read of a thousand pages about Plath’s brilliant life and art. In the process she has filled in many of the spaces in the poet’s life that have remained inexplicably blank: her professor-father, Otto Plath’s, early life after immigrating to this country; the influential relationship between Plath and her psychiatrist, Ruth Beuscher; and the behind-the-scenes alliance between Plath’s mother, Aurelia, and the poet’s benefactress, Olive Higgins Prouty. Ultimately what emerges is the portrait of a highly resourceful, resilient woman—an uncommonly original thinker and artist who brought passion and discipline into remarkably taut balance in both her life and poems.

Plath’s love of poetry ran deep, which Clark underscores by presenting selections from her juvenilia, something no previous biographer has done. These excerpts trace the rapid evolution of Plath’s rare lyrical gift and the singular industry and ambition with which she drove herself to express it as she matured. Clark also emphasizes Plath’s professionalism, which was unusual for a woman writer of her time. Despite regular rejections, she systematically continued to submit both poetry and fiction to women’s magazines and literary publications, and she also mastered the sophisticated art of networking, pointedly establishing contact with well-known poets and critics, such as Marianne Moore and A. Alvarez.

Like most lives, however, the trajectory of Plath’s was complicated. Losing her father at a young age, constantly striving to earn money to make ends meet, and trying to simultaneously find academic, professional, and romantic fulfillment during a period when most of her well-educated female peers still chose marriage as their life’s work were ongoing challenges that she met with courage and determination.

De-pathologizing Plath is the central mission of Clark’s book: “I have tried to recover what Plath gave to us rather than what she gave up,” Clark declares in the book’s prologue. To that end she has not only probed Plath’s family history more deeply than previous biographers, but she also includes the commentary of friends not previously consulted. Additionally, she draws on a wealth of other new material, including the complete Ted Hughes archives and the voluminous research for a biography of Plath by the scholar Harriet Rosenstein that was never published. Clark’s aim is to “reposition” Plath “as one of the most important American writers of the twentieth century.”

This is the only biography of Sylvia Plath that has ever given me a logical way to think about why she decided to end her life. Clark convincingly argues that both the combination of potent medications Plath was taking for depression during her final weeks as well as her fear of again being forced to submit to electroshock therapy, an experience that had previously so traumatized her that she vowed never to allow herself to undergo it again, contributed significantly to her decision. Yet Plath’s struggles with depression had always existed in counterpoise with the instinctive pull she had also felt toward optimism and hope. “Wintering,” the final poem in the original manuscript of Ariel that she left on her desk the morning of her death, ends: “The bees are flying. / They taste the spring.”