North American Gaels: Speech, Story, and Song in the Diaspora 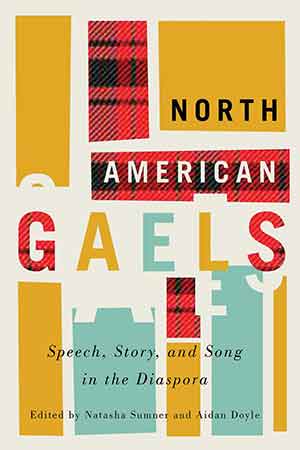 THE MONOLITH OF American history often overshadows the continent’s early multiculturalism. This is especially true of the Age of Revolution, when Americanism as both noun and verb began its long echo across the world. So much has been written about the burgeoning American state of that time that the collective of cultures which made it tend to get lost in the noise. Here is a book that delivers on that lamentable gap, with a history and present-day analysis of two shared, but disparately rich, cultures: Irish and Scottish Gaelic.

When the first cracks in the old-world Gaelic political systems spurred emigration to the New World, both Irish and Scottish Gaels were drawing on a deep well of art, music, and literature, thanks to their shared literary language, Classical Gaelic. Being the sixteenth century, illiteracy was rampant (though slightly less among the Scots), and both cultures relied heavily on oral traditions. British ingress from the south and east was the ultimate catalyst of change. Its focus on expunging the Gaels through diminishing their language pushed the most stubborn-tongued to the very western fringes of their land and, ultimately, to North America.

Cultural instability wrought by transference made these incomers susceptible to change and influence, though some fared better than others. From Cape Wrath and the Outer Hebrides (Am Parbh and Na h-Eileanan Siar), the Scots found new homes in North Carolina’s Cape Fear and Canada’s Maritime region. By and large settling in the countryside and towns comprised of kinfolk, Scottish Gaels maintained their traditions and customs through collective memory and insulation. The Irish, for their part, went largely urban, clustering in boroughs of New York and Boston, where intergenerational transmission of Gaelic met with more resistance.

Adding to the difficulty of preservation was bureaucratic racialism. The Canadian government grouped Irish and Scottish Gaelic into one language, and the United States acculturated Celtic with English—assimilation techniques many Gaels likely thought they’d escaped by leaving their English- controlled homelands. These sleights may seem like hair-splitting now, but these language cousins are not siblings, let alone twins.

At its best, this book is a reminder of the burden placed on speakers of dying languages. That the few remaining native Gaelic speakers are sometimes forced to choose between their interests and the continuation of their language is a tragedy worthy of Ossian. Gaelic’s decline has been long in the making (its last “revival” dates to the late nineteenth century), and an appropriate sense of urgency runs through the book. But there is also celebration. Learning about the songs, myths, and legends of the Gaels is a joy to read. Sumner and Doyle have compiled a wonderful breadth of research and inquiry, showing not only the deep history of the Gaels’ language but their spirit of life.

Much credit is obviously due to Kenneth Nilsen, a man for whom a moving tribute is included. Though Brooklyn-born, he was “more Gaelic than the Gaels,” in the opinion of one interviewee—proof that dying languages are accessible to anyone with the will and means to learn them. It’s largely owing to his tireless effort cataloging the Gaelic speakers of North America that the vital and necessary work presented in this book, and that yet to come, is possible.