A Perfect Cemetery by Federico Falco 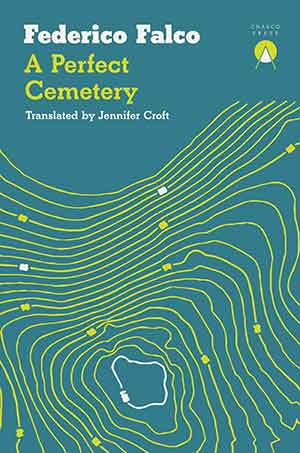 IN THE AFTERWORD TO A Perfect Cemetery, translator Jennifer Croft contemplates the crucial translation challenge of rendering the relationship between place and speech through vernacular, dialect, or peculiar conversation. Croft concludes that the question of “how to represent place in speech” is unanswerable, “because translation isn’t a system. Translation is an encounter between two human beings that takes place in words that belong to different systems.” As an example, she gives her choice, in one particular moment, to translate the Spanish word hermoso as “swell,” instead of—as might be expected—“beautiful” or “lovely.” Her explanation for this unorthodox choice lies in another debate that rages throughout the history of literary translation: the question of loyalty. “[I]t is the word to which I’m most attached.”

This attachment to her translation is, in turn, a form of loyalty to Federico Falco’s original Spanish text. Whether a translation is faithful to the original is a question that presumes a text has a fixed and singular meaning and casts the translation as a mere vessel to be judged on accuracy above all else. But, as Croft’s faithfulness to the word “swell” illustrates, a text’s meaning is not fixed but rather uncovered and created, again and again, by all its readers. Croft’s translations of the stories in A Perfect Cemetery are loyal to the profound beauty, rootedness, and longing they portray.

The stories, in turn, each focus on relationships between human beings, nonhuman beings, and the spaces they occupy. At the heart of all the relationships are questions of loyalty. The characters explore how to honor estranged family members, how to show love to people who have abandoned a community, what happens when family members’ philosophies diverge. The stories have been described as “interlocking,” but that characterization is too mechanical, too artifactual for my taste. I’d rather call them “interlaken”: a series of stunning bodies of water, secretly connected by underground rivers. The stories’ relationships aren’t immediately evident, but one can sense they are of a piece, fed by the same spring. More than anything, one is left with a strong sense of place.

Alongside its loyalty to the landscapes of Córdoba (the Argentine province that serves as the setting for all the stories), which are described with intense sensory detail, A Perfect Cemetery explores the question of loyalty in the tender, subtle portraits of its protagonists. Whether it is the king of the hares, who finds more comfortable society with the animals of the forest than with the human beings who populate the town; a teenage girl who forsakes her family’s religion in search of new connections; a designer hired to create the perfect resting place for a man’s implacable father; a woman who seeks a new site for her loyalties after her home is threatened; or a widow seeking to maintain her previous life as a wife: all the characters’ struggles in A Perfect Cemetery revolve around faithfulness to place and to one another.