Chess with My Grandfather by Ariel Magnus 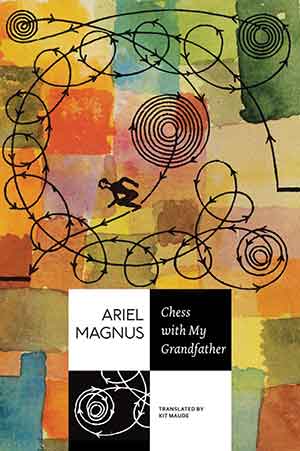 WHAT IS CHESS if not a metaphorical microcosm of a myriad of human institutions, conflicts, and systems? In Chess with My Grandfather, Argentine novelist Ariel Magnus (with the help of Kit Maude, his infinitely talented translator), descendant of German immigrants, shows just how honed a tool this tabletop theater has been in acting as a proxy for a vast number of human endeavors, specifically war. And what better war to allegorize than the Second World War, whose star hegemons resemble the command the King and Queen pieces have over the fate of the game?

Ariel Magnus’s grandfather, Heinz Magnus, was a German Jew who managed to escape (along with his mother, father, and sister) likely death by fleeing to Buenos Aires, Argentina, after the first rumors of Hitler’s ascent and the ensuing transcontinental conflict. The plot of Heinz’s relatively languid life in Argentina crescendos when the 8th Chess Olympiad takes place between August 21 and September 19, 1939, in the Politeama Theater in his newfound hometown, coinciding with the outbreak of the war.

Ultimately, Heinz gives up on the idea of love and takes on a new, more arduous task. In his long-winded soliloquies scattered throughout otherwise mundane diary entries, Heinz argues that the political boundaries between nations are “unnatural,” similar to the checkered squares on the chessboard that were introduced to the blank expanse of the board in the tenth century. Heinz eventually transitions from a reserved pacifist into a full-blown anarchist. Determined to prevent the Germans from corrupting the most classical of ancient pastimes, Heinz, with the help of the Palestinian, French, and Polish teams, attempts to thwart the only remaining conquerable enterprise for the Germans: the world of chess.

Ariel Magnus uses the sixty-four-square board as a canvas for the German domination of the “checkerboard of Europe”; the international chess competition that the Germans so effortlessly conquer symbolizes their eventual belligerent conquest of Europe. Chess with my Grandfather is laden with what seem to be long-winded bouts of inspiration that can be likened to a diver’s parlous journey into the obscured unknown, all in the duration of one fateful breath. Shifting between such genres as novel, biography, philosophical essay, and historical fiction over the course of this work, Magnus attempts to rectify his grandfather’s failure to transcribe his life in a single meaningful, coherent work. As he probes the intersection of racism, nationalism, and war, Magnus dips in and out of history and fiction to reveal telling philosophical lessons about the tendency of man to make black and white the cultures of the world, when in reality we are all pieces of the same game.