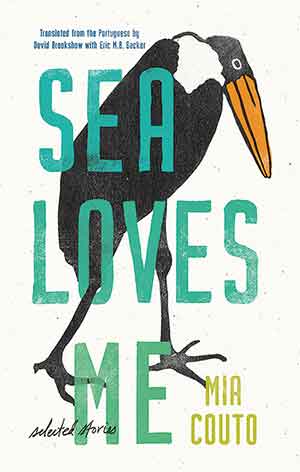 “SEA LOVES ME,” the title story of Mia Couto’s latest collection, brims with secrets, seduction, and the wisdom of ancestors. Zeca Perpétuo, the widowed narrator, is pining for his voluptuous neighbor, Dona Luarmina, daughter of a Greek sailor and Mozambican mother. But before she’ll succumb to his charms, Luarmina insists Zeca divulge his most private memories. And so, he begins to weave together tales—of his fisherman father, who dove into the sea to rescue his mistress and resurfaced with the eyes of a shark; of his wayward wife, Henriquinha, who mysteriously vanished off a cliff; and Maria Ballerina, the whirling dervish of a dancer who caught fire one night and was turned to ashes. The more Zeca recalls, the weepier he gets. “A tear is the sea caressing your soul,” Luarmina explains. “That little speck of water is us as we return to the womb we came from.”

Mia Couto, winner of the 2014 Neustadt International Prize for Literature and author, most recently, of the novel The Sword and the Spear (WLT, Autumn 2020, 90), has been writing bewitching tales like this his entire career. Sea Loves Me, in fact, includes work from two previous collections, The Fire and The Waters of Time, as well as thirty-six stories that appear in English for the first time. (Eric M.B. Becker has translated the stories of The Waters of Time; the rest are by David Brookshaw, Couto’s longtime translator. Both have done masterful jobs rendering Couto’s inventive language and imagery into English.)

Taken as a whole, the stories offer a kaleidoscopic vision of Couto’s world, deeply rooted in Mozambique but imbued with an ethereal, otherworldly quality. Often in just a few pages, Couto is able to breathe life into a variety of characters that range from war refugees, witch doctors, and cross-dressing apparitions to bird-dreaming baobab trees and blind fishermen. Rural villagers, stuck in time, jostle with newly arrived city dwellers. Africans, Portuguese, Indians—and combinations of the three—fall in love across communities, even species. In “Bartolominha and the Pelican,” a lonely woman shares her bed with a pelican, hugging its wings so that “her body would learn to fly”; while in “So You Haven’t Flown Yet, Carlota Gentina?” a condemned man confesses, “Inside me, I’m not alone. I’m many. . . . That’s why, when I tell my story, I mix myself up, a mulata not of races but of existences.”

Sea Loves Me is a thrilling addition to Couto’s extraordinary body of work, bringing together new and old stories that evoke past and present Mozambique, memories and dreamscapes, natural and spirit worlds. War, race, sky and sea, death and desire—these are just a few of the eternal elements Couto uses to mold his wise, enchanting fiction. “As I rowed a long return,” thinks the solitary boatman in “The Waters of Time,” “the old words of my grandfather came to mind: Water and time are twin brothers, born of the same womb. I had just discovered in myself a river that would never die.”