The Art of Wearing a Trench Coat by Sergi Pàmies 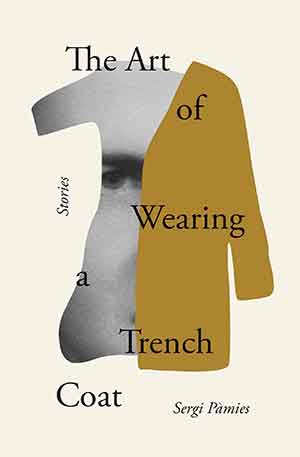 IN A RECENT INTERVIEW in La Vanguardia, Catalan author Sergi Pàmies remarks that “we are fiction and reality at the same time.” Accordingly, the narrators of the thirteen stories in The Art of Wearing a Trench Coat are more or less autobiographical: usually unnamed first-person (singular and plural), occasionally second- or even a cinematic third-person, but all discernible avatars for their author. In one story, we are told his mother was fond of saying that “the advantage of being a writer was that everything that happened to you could be turned into literature,” a truism he comes to admire as a “particular method of getting by.” This could be considered the book’s modus operandi, transforming sundry quirks of everyday life into occasions for insightful meditations on the intimate subjects of middle age: growing older, losing your parents, going through a divorce, and raising children.

Pàmies is a popular writer in Spain, where he is a fixture in radio, television, and print and has written a number of award-winning story collections and novels. He comes with a storied pedigree: his parents, writer and activist Teresa Pàmies and Communist politician Gregorio López Raimundo, were noted figures in the anti-Franco resistance, and Pàmies was born during their years of exile in Paris. The backdrop to these stories, familiar to native readers, is the sociopolitical strife spanning twentieth-century Spain: the forty-year Francoist regime, the difficult transition to democracy predicated on the state-mandated suppression of memory, the eventual and ongoing reckoning with the past, not to mention the attendant struggle for Catalan independence.

This history is distilled into the details and vicissitudes of family life. In the remembrance “Father-Son Christmas Carol,” beautifully framed in terms of nostalgia as a form of archaeological excavation, Pàmies’s usually absent father momentarily relaxes his commitment to communist thrift to take his son to pick out a present for his Christmas wish list, only to inadvertently confirm the nonexistence of that outsized childhood myth, Santa Claus. In contrast to the “ideological intrusions” that mark his own upbringing, Pàmies wholeheartedly embraces normalcy for his own children, of a generation “not forced to live with the same historical intensity as their ancestors.”

The keystone story, “I’m No One to Be Giving You Advice,” from which the book draws its title, begins with the startling adolescent fantasy of being the son of Jorge Semprún (Semprún, the dissident exile, socialist politician, Buchenwald survivor, and writer who insisted on the power of fiction to explore historical truth, and also a friend of Pàmies’s parents). This almost essayistic piece traces the wane and wax of paternal idolatry, whose progression marks the narrator’s coming of age. What unites the role models in young Pàmies’s life is the polysemic figure of the trench coat, when worn best conveying a masculine confidence that he can never seem to adopt. Instead, our avowedly average antihero, beset by ailments and pudge and hang-ups, accedes that although his father’s coat may never quite fit him, he can wear it nonetheless. Self-awareness, in Pàmies’s book, is a form of morality too.

Pàmies repeatedly reminds us of his own lack of elegance, especially in the stories about the decline of his marriage. Yet in all this, The Art of Wearing a Trench Coat is suffused with a quiet humor, mostly in the form of irony and endearing self-deprecation: “Generally speaking, a union of two people evinces a clear disparity in beauty, status, or intelligence. I fell short in all three.” Pàmies’s lilting approach recalls the dialectical quality described as “lightness” by Italo Calvino in Six Memos for the Next Millennium: writing that makes use of elements which resist the gravitational pull of the raw material of reality in order to better represent it. Translator Adrian Nathan West, a stylist of the first order, performs a similar operation in his transformation of the text from Catalan to English, delivering lean and pithy prose that brings these broody vignettes just the right touch of levity.