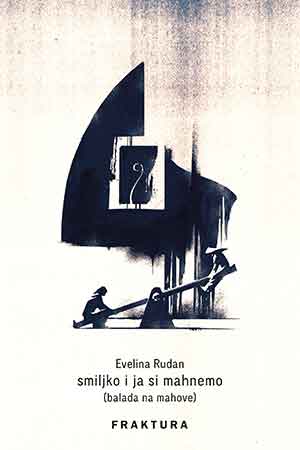 EVELINA RUDAN (b. 1971) is an awarded and translated Croatian poet and scholar. She has published several poetry books, some of which are in standard Croatian, some in Chakavian dialect, and one book for children. Her newest, sixth book of poetry, Smiljko i ja si mahnemo (balada na mahove) (Smiljko and I are waving to each other [A ballad from time to time]) is written in Chakavian dialect, one of the most archaic Croatian dialects, spoken by Croats near the Adriatic coast. It keeps the richness of the language alive and preserves a local and a personal heritage.

The book consists of forty long poems that tell stories, melodically and rhythmically, about her childhood and youth events, so it can be read as a short novel in verse. After each poem, the author includes a vocabulary of Chakavian words, allowing readers to understand her native language and culture. At first glance, this appendix looks like a standard, dry, and expert narrative explanation, but soon we understand that it reflects the author’s poetic world and imagination.

The book title is chosen to articulate the power of a childhood friendship that continues later, as Smiljko and the poet get older. A nonverbal communication gesture between two friends is also the refrain of the first verse of each poem. The gesture always turns into a call for an immediate meeting and conversation. Sometimes the meetings open up memories. Sometimes they bring new intellectual knowledge that the friends have to share with each other. While their memories belong to the world of children’s play and the mysterious discovery of nature, their debates about books are part of their educational knowledge and growth.

In essence, this is a book about a little girl growing up in a boy gang, the Croatian seaside, and the complexity of the former Yugoslavia’s culture. It describes numerous episodes from the children’s world but also a girl’s unconventional gender roles as well as documenting a former way of life. Unfortunately, the cheerful world is marked with the tragic death of one boy, her brother. Even though the poet does not write many lines about this trauma, a clever usage of dialect does express her deep pain. The reader is left believing that these archaic words are the only means to portray the feelings of sorrow.

The shadow of a tragedy enters with the ending of the first poem, with observation of the time when her family was a complete unit. This awareness becomes another refrain, which is repeated at the end of every poem. In contrast to the introductory refrain about Smiljko and the poet, this one shifts from knowledge about this rupture in the life of the family to knowledge about the time when children stay become separated from family members as adults, and emptiness or nihilism can creep in.

Stories about the tragedy are compatible with the book’s subtitle, “A Ballad from Time to Time.” Even more than ballads, the book is a collection of odes, since it celebrates life, play, and friendship. It additionally includes contours of prayer, asking for people to be saved, as well as evoking creativity, nature, and language. With powerful lyrical tools, buoyed by the beauty, melody, and rhythmic play of the Chakavian dialect, the poet successfully evokes a rich world and transmits truths about life and communication. The world the author sees today, she notes with a degree of sadness and anxiety, is much different, so different, in fact, that she admits she is lost in it. However, the whole book reminds us, right now, during one of the world’s deadliest pandemics and imposed social distancing, that each of us knows a Smiljko, a friend to whom we wave, whom we call and whom we need in order to be closer to ourselves, to other people, to the world.