How to Order the Universe by María José Ferrada 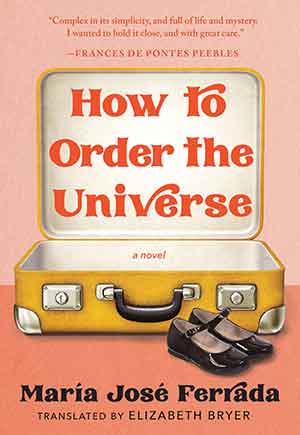 WHEN SHE GOES TO SCHOOL , which isn’t often, the seven-year-old protagonist of this terrific novel is reminded that she has atypical interests. Let her classmates scribble rhyming verse about blue skies. She’d rather write paeans to pairs of pliers. M, as she’s called, is never far from her father, D, a traveling hardware salesman who thinks formal education is overrated. Each day, they drive around Chile’s hinterlands, persuading store owners to stock his hammers and wrenches. D neglects to tell his wife that their daughter accompanies him on daylong sales trips, but M is a vital partner. When she stands by his side, adorable and vaguely sad, shopkeepers tend to order more stuff.

A successful author of children’s books, Santiago-based María José Ferrada has set How to Order the Universe, her first novel for adults, in the 1970s, when Augusto Pinochet’s dictatorship jailed and murdered countless law-abiding Chileans. M’s mother—she’s not part of M and D’s secret society, so we never learn her name or initial—knows these facts too well. Her first love, a regime opponent, disappeared without explanation. Her pain is renewed when D befriends a photographer who knew her missing ex. The photographer is driven to document the junta’s crimes, a quest that imperils all who enter his orbit.

Narrated decades later by an adult M, this is a short book with ambitious goals. Ferrada wants to honor those who suffered under fascist rule while also spinning a comic yarn full of workplace absurdities and domestic intrigue. She accomplishes both with enviable grace. Why doesn’t M’s mother realize she’s skipping school? Because D and his daughter have concocted “a false booklet of parent-teacher communications.” Though her mother seems withdrawn, in truth, “she was simply sad,” M says, “and her sadness meant she couldn’t pay attention to details.”

At heart, this is an appealing ode to eccentric forms of resistance in the face of brutal repression. Ferrada’s portraits of D and his colleagues are entertaining. All are liars—one claims he triggered a woman’s heart attack by delivering too many sewing needles, another that he accidentally drove his sedan into a river and floated to safety on a car door—but they’re endearingly so. Their apocryphal tales take on a mournful hue when viewed as coping mechanisms, a way to make sense of life and loss in a country run by a murderer. M, meanwhile, learns to organize her thinking by shadowing her sweet, misguided father, carefully taxonomizing his wares (everything from screwdrivers to peepholes), the stores he supplies (mom-and-pops in varying states of disorganization), and his expense-account-padding scams (falsified restaurant checks, pilfered tollbooth receipts).

As it chugs toward a tense third-act crisis, this bighearted story, skillfully translated by Elizabeth Bryer, offers a host of memorable set pieces. Hitched together by this multitalented writer, they make for an outstanding novel.