On Essays: Montaigne to the Present 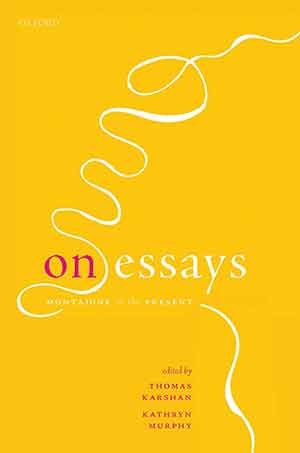 IN HER INTRODUCTION to The Best American Essays 1992, Susan Sontag writes: “The culture administered by universities has always regarded the essay with suspicion.” Twenty-eight years later, does the appearance of On Essays: Montaigne to the Present—produced by one of the world’s premier university publishers and written by academics—indicate a change of heart? Scholars are certainly showing signs of a dawning awareness that this is an area worth exploring. Thomas Karshan and Kathryn Murphy are correct that the twenty-first century is witnessing “a revival of interest in the essay form.” In similar vein, Felicity James—who contributes an excellent chapter on Charles Lamb—talks about the essay today being “rediscovered and reinvented.” And, in another essay-focused volume published in 2020—Imagined Spaces, edited by Gail Low and Kirsty Gunn—no less an authority than Phillip Lopate adds his voice to this idea of a contemporary essay-renaissance. Though the essay has long been “neglected at a theoretical level,” Lopate reckons this “is beginning to change.” In evidence he cites recent conferences and books that have started to construct “a poetics and ideology of the essay.”

But although there are signs that the attitude Sontag noted in 1992 is changing, it would be premature to see the essay being comfortably ensconced in the standard syllabus of literary concerns, its pariah status exchanged for the same kind of mantle of genre-respectability that scholarship has draped so thickly over novels and poetry. Theodor Adorno—whose theoretical work on the essay remains an important touchstone—recognized heresy as “the law of the innermost form” of this type of writing. The essay is an independent, even outlaw genre that likes to go its own way. Orthodoxy and conformity are anathema to it. As such, it is resistant to the kind of categories scholars bring to bear. Karshan and Murphy talk about “the various ways in which the essay bristles against academic writing.” Specifically, they identify its “resistance to introductions, to generalization and abstraction, to accounts of its origins, its freedom from discipline, rules, and criteria.” In other words, the essay swims against the current in which books like this are written. Essayists should not be surprised, therefore, if they experience a certain bristling as they read—but there is also much to engage their interest.

Attempting to summarize the book’s seventeen chapters is beyond the reach of a brief review. Instead, as a way of indicating something of the spread of topics, let me pick out a few points that struck me. Fred Parker’s chapter on David Hume offers a refreshing perspective on this key Scottish thinker by arguing that it was “as an essayist, not a philosopher, that Hume made his name.” Scott Black makes a convincing case for seeing Laurence Sterne’s Tristram Shandy as more an essay than a novel, flagging up “digression, irregularity, wildness” and “discursive wandering about” as some of its most striking essaylike features. Tom Wright’s examination of the “voiced essay” in Carlyle and Emerson—both of whom spoke to live audiences as well as producing written texts—provides persuasive evidence that the essay “has never been solely introspective or intimate.” Michael Wood—in a chapter that nicely complements those on Hume and Sterne—looks at “Essayism in the British novel after Borges.” His comments on Julian Barnes are particularly good.

Writing on “The Psychoanalyst and the Essay,” Adam Phillips shows how, for those professionally engaged in this area, calling their books essay collections “is like a declaration of independence.” Looking at the essay’s “genial scepticism” and “hospitable curiosity,” Phillips makes the intriguing suggestion that “the essay can be, to put it psychoanalytically, the genre in which we are free of tyrannical parents.” Christy Wampole contributes a photo essay on Salvador Dalí’s illustrations for an edition of Montaigne’s essays published by Doubleday in 1947. In a fascinating aside she speculates that if Montaigne had had a camera, he “would have left behind a different kind of cultural artefact.”

Other chapters range over the importance of coffee houses and smoking to the eighteenth-century English essay; “The Montaignian Essay”; Walter Pater and the essay; essayism in George Eliot and Thomas Hardy; and politics in the English essay. Ned Stuckey-French provides expert commentary on the American essay in the present century—though his assessment of John D’Agata’s work seems to underplay the seriousness of the critique it received in William Deresiewicz’s devasting attack in the Atlantic Monthly.

By its very nature, a book of this type can’t be comprehensive. The editors make clear that it’s not intended as a handbook, companion, encyclopedia, or history of the essay. They recognize that any reader is likely to have “favorite essayists to whom we have paid scant attention.” I wouldn’t expect my favorites to be mentioned, but I was surprised by some of the names that were absent: E. B. White and John Berger, for instance. It’s good to see recognition that “the introductions by practicing essayists contributed annually since 1986 to Robert Atwan’s Best American Essays anthologies form, taken together, one of the most substantial recent bodies of thought on the essay.” That is undoubtedly the case. But Atwan’s expert yearly forewords should surely be included too. It’s likewise welcome to see editors of anthologies being credited for doing “important work in framing their topics,” but the references that accompany this point seem curiously limited. It’s a particular shame that Lydia Fakundiny’s The Art of the Essay, with its brilliant introduction, is nowhere mentioned. One might also have expected at least a nod to The Penguin Book of Twentieth-Century Essays—if only to quote editor Ian Hamilton’s deft dismissal of a particular type of belletristic essay. He calls them “virtuoso feats of pointless eloquence.”

To return to Susan Sontag, in “Under the Sign of Susan,” an essay included in The Best American Essays 2020, A. O. Scott suggests that Sontag’s essays are exciting “not just because of the ideas they impart but because you feel within them the rhythms and pulsations of a living intelligence.” It is precisely such rhythms and pulsations that characterize good work in this area—and that make it so hard for academic prose to handle. (Editorial note: For more on WLT’s commitment to the genre, see Robert Con Davis-Undiano’s “Back to the Essay” manifesto in the Winter 2000 issue.)