Studying with Miss Bishop: Memoirs from a Young Writer’s Life by Dana Gioia 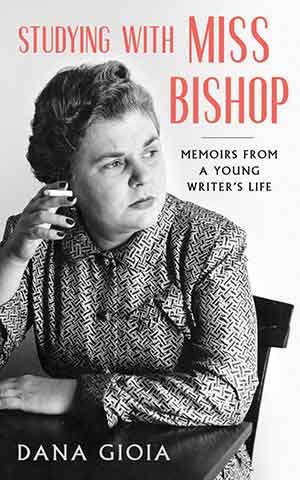 AS THE TITLE SUGGESTS, this book of memoirs recounts the author’s interactions with Elizabeth Bishop, Robert Fitzgerald, and John Cheever as a student at Harvard and Stanford, but also with James Dickey at the Library of Congress and with persons unknown to most people (the author’s Mexican uncle and mostly forgotten poet, Ronald Perry). This is not, however, a Vasari-style collection of biographical sketches; instead, it is a book about Gioia’s “becoming,” a portrait of the poet as a young boy and man. In fact, after an important contextualizing preface, the first chapter is devoted not to one of the authors mentioned above but to Gioia himself in his “happy, lonely childhood” among working-class relatives (“a tight enclave of Sicilian relations”) and books left by his deceased uncle. The reader soon discovers that this book is more than supposed; it is a personal history of influence and stages of growth, about moments of recognition and awareness, then and “now,” by an author processing his own past.

The mystery of literary influence across cultures and time is one thing (e.g., that of Homer to Virgil to Dante), and it is usually discernible in matters of style, technique, and/or theme; however, influence is all the more mysterious and ineffable when complicated by interpersonal experience and the interplay of personalities and temperaments. There is also the issue of timing, of receptivity or vulnerability to influence and change, and of the phases of life and development of both student and teacher. (The best teachers and artists are always still under construction themselves, never fully “accomplished.”) Influence, then, between authentic talents is not a question of one being molded or formed by the other, but of taking from another what one already recognizes as one’s own, a spirit assembling/constructing its poetic body from the “materials” it chooses from the world around it. The artist participates in their own birth by selecting literary parents from among the many options or by selecting certain qualities to emulate, revise, and combine. The resulting newly created style and voice are thus woven like a bird’s nest holding the globed promise of original work.

So it is that Gioia, the important American poet so luminously encountered in 99 Poems, humbly and unaffectedly recalls for us the intimacies of his own influence by Bishop, Fitzgerald, and others—at least those accessible to conscious recollection, for there is always more. In so doing, he not only allows us the pleasure (promised by the title) of learning more about the personalities and manners of the encountered writers but also a greater understanding of how he himself was influenced by these encounters. In the chapter devoted to Bishop, we soon surmise that Bishop’s unassuming personal style was also something he admired and carried into his own manner; similarly, the freedom from stylistic tics and the clarity of language we find in Bishop are qualities we discern in Gioia’s work. In the chapter devoted to Fitzgerald, Gioia recalls Fitzgerald’s teaching methods, specifically his lingering over individual lines of poetry. In offering us these examples, Gioia soon seems to be channeling Fitzgerald himself, and we feel as if we are there in the classroom (a good thing, in this case) hearing what we might have heard had we been actually present.

“Channeling,” however, is the wrong word because we soon realize that Gioia has fully internalized the lessons of Fitzgerald (and others) for himself; we find the focus on musicality and the individual line everywhere present in Gioia’s own work. Similarly, in the chapter on Cheever, Gioia’s writing takes on a shimmering narrative quality reminiscent of Cheever’s own: “A waterfall of conversations filled the air. . . . Mary led him gently through the packed room towards the door. I watched them over the bobbing heads of the crowd until his tiny, shuffling frame disappeared into the early evening.” Hundreds, possibly thousands, of students met these same writers, often to little or no effect. It is not, then, the meeting of gifted persons that matters as much as what one takes from those meetings, in person or in print.

In summation, Gioia’s writing is vivid, generous, and unpretentious, leaving us with enduring and haunting images so fully realized that we feel as if we too were there. This is a beautiful book and an important contribution to American letters. (Editorial note: “Poetic Collaborations,” Gioia’s fascinating interview with Michelle Johnson, appears in the September 2011 issue of WLT.)